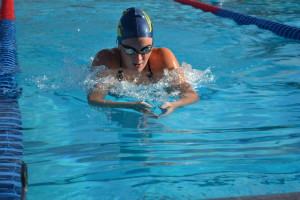 The Steinbrenner swim team faced off against Sickles High School last week, with the boys winning 131 to 43, the girls however lost Thursday, with a score of 82 to 95.

Girls sophomore, Ashley Kubel broke six records last year as a freshman, and has already broken two more this year. Kubel broke the record for the 50 freestyle with a time of 25.96, beating the original time of 26.02. Kubel’s goal for this swim season is to go to States in October and to keep breaking records.

Along with Kubel, boys team captain Austin Childers, along with Ian, Christiaan, and Tristan Hazlett were able to pull threw and just barely break a school record five days earlier at City Relays. Childers and the Hazlett’s won the relay with a time of 1:49.42, shaving of  six tenths of a second off the record.

“It feels great, we just went out there and swam our hearts out,” says Childers, “I think we should continuously break on record, since we are all in one relay together.” Childers is hoping to take the 200 Medley to regionals with a time of 1:45 by the end of this season.

One thought on “swimming: Boys win, girls lose at home against sickles”