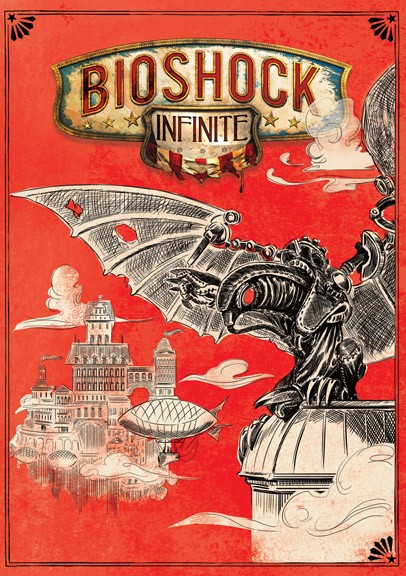 First of all, I want to point out that this review will not contain any spoilers. Some may say that this isn’t necessary, but believe me, it is. This game is primarily plot driven. From the first step into Columbia to the last scene, all of your actions have consequences- but more on that later.

The main plot consists of the main character Booker DeWitt “saving” the imprisoned damsel Elizabeth from the socially backwards Founding Fathers Worshiping, drug-using racists that inhabit the floating city of Columbia in the year 1912. That’s all the plot really is. The real magic happens when you make decisions that immerse you into the plot. I can’t remember the last time I got goose bumps as frequently as I did while playing this game.

The gameplay is very similar to the earlier Bioshocks. Instead of EVE, we now have Salts, the equivalent of Mana in a fantasy game. There is still a currency system, and the plot transitions work in a similar fashion. In short,  Infinite plays the same, but the feel of the game is incredibly different. The ambiance of a light-filled floating city is far happier than that of a gloomy underwater city, but that doesn’t mean it doesn’t contain creepy throwbacks to the Survival-Horror genre of the originals. In one section, you explore an abandoned insane asylum, and let’s just say, it brought back great memories of the dentist scene from Bioshock 1.

The biggest difference, though, is the skyline system.

Throughout the game, there are rail lines circling the “battle area”. You can jump onto them, ride around to avoid enemies and jump onto enemies to deal damage. This constant jumping, swinging and flying make the fighting much different than any other shooter I have played. If one likes to play a sniper-type character, they can swing up to a high point and shoot from there. I took the heavy revolver approach, and, needless to say, I died quite a bit. Still, this all adds to this motif of decision.

One of the under appreciated aspects, though, is the extensive character customization through weapons, clothing and Vigors. Not like the “I’m going to take 10 hours to make my Skyrim character’s face look perfect” customization, but the choices available to upgrade weapons. I went through the game not taking advantage of all the loot I acquired, when in fact I could have easily made it a bit easier by upgrading my pistol damage earlier. That’s my lesson to be learned for the next play through.

In addition, the graphics are absolutely stunning, and of course, this goes hand in hand with the Bioshock legacy of outstanding music.

As I previously mentioned, the game is driven by decisions. The extensive plot development is like taking a “choose your own adventure” book, and pushing it to the next level. Just like any good book, you create emotional ties to the characters and walk away from the ending as if you can’t believe there isn’t any more. Along with this, the immersion is unlike anything I have played. Sure, I spent many an hour playing Oblivion (which is also quite good), but the emotions in this game surpass anything I have seen.

When this game was announced, five years after the first Bioshock (we aren’t going to talk about Bioshock 2), I was a little disappointed that I wasn’t going back to Rapture, and I was skeptical about the idea of having the game progress on a magical floating city. It also didn’t help that it was delayed three times and made by a different company than its predecessor. But the fact of the matter is, every second of waiting was worth it. I cannot even fathom the code that went into the decision making mechanic of this game. The constant reminders and hints of the connections to the previous game and mentally tiring plot twists make this one heck of a ride. So, if you have $60 and the means to play it, you are wasting gameplay time. This is for sure the game of the year, and quite possibly one of the best video games I have ever played. Score: 10/10.

Note: Things that will make the game even better:

One thought on “Bioshock Infinite blows minds into another dimension [Review]”