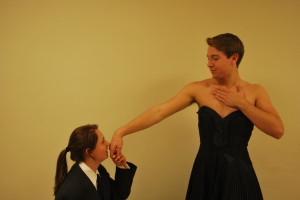 In an attempt to add a unique spin to the typical dance environment and to raise additional funds, the school, along with the PTSA, recently scheduled a Sadie Hawkins dance to take place on April 20 in the cafeteria at 7 p.m.

The Sadie Hawkins dance has been around since 1937, where it started from a comic strip and eventually became the dance that is known today. The comic strip was about a day, every year, where single women chased the single men around town and caught one for marriage. The main character, Sadie, was the ugliest girl in town, which made the day her favorite. As the comic gained popularity, it was turned into the musical, Li’l Abner, and celebrated throughout schools.

The dance taking place at the school will be open to all grades, and tickets start going on sale April 3. They will continue to be sold until April 12. The cost per ticket will be $20.

“We wanted something different than homecoming and prom, and we wanted the girls to ask so that there was less pressure on the guys,” said PTSA representative Kim Birnbaum.

The theme of the dance is diamonds and denim, a formal style that Birnbaum says will allow students to attend the dance without being required to spend large sums of money on luxurious things.

In order to gauge interest, the PTSA posted a poll on Edline about the dance, and 362 students (14 percent of the school population) participated.

According to Birnbaum, when students purchase their tickets to the dance, they will also be given a card that will direct them to the website of the DJ that will be at the dance.

Each student can then select five songs they’d like to be played during the dance, and the DJ will prepare a playlist with the requests for the night of the dance.

The PTSA will analyze the results of this year’s dance to determine if they will continue to do this in the future and make it an annual event.

“We want to do it again next year in February. We’ll probably do another poll after the dance to determine if we should do it again,” said Birnbaum.

What do you think of a Sadie Hawkins dance?

“I don’t know if I’m going, but I know two girls are going to ask me. I’ve seen it in their eyes.”

“I might go if it wasn’t a Sadie Hawkins and if it was more like homecoming.”
—Junior Tabitha Alcott

“I’d think it was good if it wasn’t a Sadie Hawkins dance and it wasn’t in the cafeteria.”
—Senior Sydney Kalita

“I’d go if they cleaned up the cafeteria, if teachers were 50 miles away and if it looked nice.”
—Senior Tyler Heveran