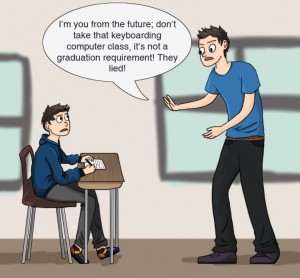 Four years can create quite a difference in the perspectives of a high school student; the retrospective senior can look back at their freshman year and reflect on their choices and experiences from being a freshman to becoming a high school graduate.

“I’ve become more open-minded and outgoing around people, more social,” said senior Macey Sidlasky. “I’m ready to start college and to start a new life. It’s kind of scary to leave though; I’ve become so comfortable in high school. I plan to go to Eckerd College in St. Pete and major in Marine Biology with a double minor in psychology and creative writing,” said Sidlasky.

Looking forward to the future is an aspect of the transition from high school to college most people think about, but there are regrets from the past that loom over graduates’ heads as well. Wishing they were more sociable, that they cared more about their classes and grades and maybe even that they participated more in school activities are just a few of these challenges.

“Social changes and coming out of my shell were the biggest differences for me,” said senior Keith Fitzgerald.

While everyone’s high school journey will vary, it is commonly known that senioritis will eventually kick in and the affected student will start to care less and less about schoolwork  and more about getting out of school and on to bigger things.

“I worked a lot in my classes in my freshman year,” said senior Mariana King. “But since then I kind of lost the will to come to school.”

King also stated that she was so focused on her participation in drama program, that she did not direct much attention to anything else. She says she’s become more grounded with her efforts in school.

With grades now frozen, seniors tend to slack off during the last semester. They await prom, Grad Bash, and the final moments when they walk across the stage to grab the document they’ve worked for since freshman year. The past four years are coming to a close and the graduating class of 2013 is ready to take the next step in their life.

3 thoughts on “Seniors look back at their freshman year”