Maybe I am falling out of touch or going deaf, but listening to Chicago rapper Chief Keef’s debut album Finally Rich caused me to question what I, even as a fan of the likes of Lil B, have assumed about music. Keef’s music is beyond ignorant, featuring lyrics like “I ain’t with the drama, you can meet my llama,” noisy beats from the likes of Keef’s head disciple Young Chop, “Leekeleek”, and “K.E. On The Track”, and speaks in a voice akin to what you would get if you cut off Gucci Mane’s tongue and applied the Bane (from The Dark Knight Rises) filter to everything he said, spitting lines composed of 10% English and 90% mantra-like caveman slang dialect. I don’t know what the folks at Pitchfork are smoking, but reviewing Chief Keef as if he were some typical artist worthy of normal consideration is impossible to do in good conscience. 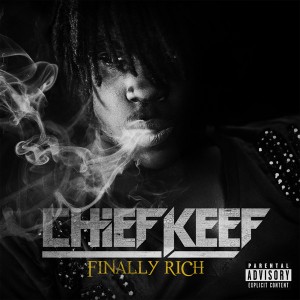 Finally Rich leads off with one of Keef’s chief (sorry) singles, “Love Sosa”, enhanced with a spoken intro that serves as a good (though unquotable for profanity) introduction to the absurdity of this album. Chief Keef boasts, boasts and boasts to such impossible levels that it ceases to be hilarious and becomes legitimately enigmatic. Each song, barring none, has an elementary melody which Keef repeats with the persistence of the Little Engine that Could. The verses in each song feature, I noticed, a few distinct themes: “molly water”, “Rari’s” (Ferraris?!?!), and “llamas” (anyone’s guess), as well as shout-outs to the members of Chief Keef’s crew, the Glory Boys, whose roster includes Oblah, Jimmy Baby, Young Chop, and “Sosa” himself. The differences between them are so negligible that the only noticeable difference between songs like, say, “Kobe” (bonus track, but a Keef classic) and “Ballin'” is in Chief Keef’s choice of hook / “melody”. These tunes are repeated with the speed and monotone of a funeral dirge over hyped-up trap beats with such self-confidence that the songs become … genuinely entertaining.

Alas, I’m not kidding: Finally Rich is, in the final evaluation, not a laughable piece of garbage, but a laughable trove of entertainment value. We can’t be scholars all the time, after all, and there’s no one more genuinely ignorant than Chief Keef. I wish I could quote lyrics to prove my point. Here, I’ll try: “A ____ _____, that’s that ____ I don’t like / A ______ _____, that’s that _____ I don’t like.” See? It’s brusque and profane, but songs like “3Hunna” (the number at which Keef persistently “keeps it”) and “Laughing to the Bank” (featuring one of the most profound Chief hooks ever, “Haw Haw Haw / Haw Haw Haw”) are just too much fun to disparage. Blasting “Don’t Like” (still goes the hardest out of all his songs) is just too much fun. Period.

The album’s title track and closer is actually and bizarrely genuine and nice, when it’s audible: “So I could take care of my momma / take care of my daughter / and take care of my brothers.” Even if it’s not complex (and Chief Keef never is), it’s too authentic for me to blow Chief Keef away ad hominem. But I don’t know how to score this album. As music, it’s technically beneath even being called mediocre. Chief Keef has the lyricism of a wad of kelp. The beats (most with that high-pitched Young Chop tag) are reminiscent of an Iraqi war zone. And yet, I can’t help but nod my head and drone along with the Chief as he “goes hard” for his “squad” song after song. How the equivalent of a rapping warthog has become so commercially successful is beyond me, but I’m starting to think, after days of having “Love Sosa” carved into my head, that maybe it’s me who’s lost it, not the music industry. Score: Unscorable.