In this half-season finale of The Walking Dead, wounds were peeled back open, combat reached a new level, and some of our favorite people had their lives put on the line ,making this one of the best episodes of the season so far.

The episode begins with a completely disorienting intro which presents viewers with five new survivors we have never heard of or seen before. They seem to be having some serious trouble trekking through the woods. In the midst of the zombie bludgeoning, one of the survivors (‘Mom’) is bitten on the arm, and I was surprised how much I actually cared. Long story short, they arrive at the now mostly abandoned prison that our original survivors took shelter in. 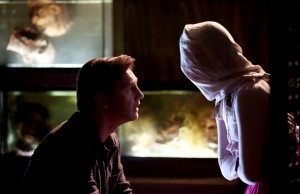 The next scene shows a boring conversation between Andrea and the Governor that has to do something with Woodbury. The most haunting part is that you really see Andrea and the Gov. becoming this tight couple, almost as if they were married. They gawk at each other, and kiss just as newlyweds do.

Getting more interesting, we visit Glenn and Maggie, post-torture. Glenn is beaten horribly and Maggie is just shaken up from the Gov.’s demands. Black eyes and broken ribs aside, Glenn gets creative and breaks off the arm of one of the dead zombies in the room from which he harvests a bone to use as a weapon, creating one of the most gruesome scenes in The Walking Dead history. They try to attack their guards, but get overtaken quite quickly.

We return to Rick and the crew as they infiltrate Woodbury with Michonne’s help. After taking refuge in a unlucky man’s house and questioning him on the location of Maggie and Glenn, they finally make a move to save their friends. In very swift fashion, they pop a few smoke grenades and save Glenn and Maggie, but in the midst of the fight Michonne runs off to complete her own tasks.

Rick and the gang become pinned down at one of the town’s gates and things quickly escalate and the first solely gun combat shootout begins in the series. It’s amazing to think of how far they have come. While everyone else is pushing themselves over the wall, Rick and Daryl supply covering fire. In the heat of the battle, Rick sees a man highly reminiscent of his now dead ex-bestfriend Shane and hesitates to take the shot earning our favorite ex-convict Oscar, a shot to the chest.  Rick snaps out of it, quickly drops the guy and runs to help Maggie and Glenn while Daryl runs off to go see his brother.

Rick hesitating to take the shot on ‘not-Shane’  really gives an in-depth look at his character. He just lost his wife, he’s got a new kid along with one that believes he is 10 years older than he actually is and don’t get me started on the phantom phone calls. Rick seems to be slowly losing his mind as time progresses and his acting could not be better. Andrew Lincoln was born in London, England with a thick English accent and yet, in every scene he nails the dialect, the believable attitude, and the overall will of an American.

Along with Lincoln, David Morrisey (the Gov.) nails his role as the villain. This guy is weird and I love to hate him. To the core, this man is pure evil, yet he still acts somewhat human all thanks to his amazing acting.

For the final scene, the Gov. presents a speech to the whole population of Woodbury (including Andrea). I won’t spoil the details, but the scene goes from a common pep talk to something much greater quite quickly and leaves viewers with a crisp cliffhanger ending.

Aside from one dull scene between the Gov. and Andrea, this episode had me on my seat the whole time. It seems as if all the different storylines (and this one new one) have begun to balance each other out. Now that they have all touched base, they can rise together and I am very excited for other half of the season in February. 9.0/10