The third season of the hit zombie TV show The Walking Dead, based on the series of comics by Robert Kirkman, is really beginning to catch the attention of  viewers. 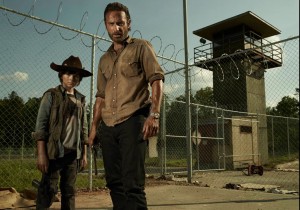 Prevoiusly, in the past two seasons (and the first five episodes of the third season), we have followed Rick Grimes, his wife and son, and other random people he met after the zombie apocalypse started, as they try to stay alive amidst a zombie apocalypse.

This season the group, Rick, Lori, Carl, T-Dog, daryl, Maggie, Glenn, Carol, Hershel, and Beth, have all moved into a prison, so Lori can give birth to her baby safely. The group in the prison also parallels Andrea’s (Andrea is a member of the group who got separated at the end of season two) life in a ‘town’ with a ‘Govnor’ who has some serious problems, and seems a little scary.

Within the first two or three episodes of the season, three members of the cast die. Lori dies in child birth, T-Dog got eatten to death by “walkers” after the prison got re-infected by the zombie prisoners, and it’s assumed that Carol is dead too.

In the November 18th episode, Rick gets more strange phone calls, Andrea realizes she isn’t very different from the town she was welcomed into, and the group is still trying to figure out what to do with the newborn baby.

Daryl talks about his childhood and his mother, and Carl confesses how he feels about what he did to his mom, after she died of loss of blood. The last episode of season two the group found out that if you die, the zombie virus is still inside you so your brain has to be destroyed no matter what, so Carl shot his momma in the head.

The phone calls Rick gets through out the show really are starting to get sketchy, they know his name, want him to answer weird questions and hang up and call randomly.

The two groups bump into each other and Glenn and Maggie get nabbed by Meryl.

With some crazy twists and turns, by the end of the episode, it would seem, Rick has lost his mind and is talking to the dead, Andrea is sleeping with the Govnor, and Carol isn’t really dead. However, other than a few things, the episode didn’t really have much of interest, I fell asleep at the end the first time, and had to watch it again.

This season has been my favorite so far, so much has happened in such few episodes that it might make it hard to finish off on the same strong note as it started. Episode score: 6/10.