Let me preface this review by saying that not a word of it matters. No matter what I say, One Direction’s influence will, at least for the moment, continue to be more widespread than syphilis. There’s nothing this humble high school music critic can do about it. The pop quintet, composed of Harry Styles, Niall Horan, and a few other blokes whose names I don’t know, could probably incite their legions of female fans into a full-scale armed military coup on the United States with a few tweets, so my attempt to express my ambivalence towards the group’s batch of 13 new songs, 13 of which are about girls, is totally futile. On the one hand, it’s undeniably catchy and solid boy-band material (in that it sounds like literally every boy band there has ever been, ever, in the history of mankind), but on the other hand, the songs are almost intolerably samey, and, when the group does attempt some variation, they almost invariably fall on their manicured faces. 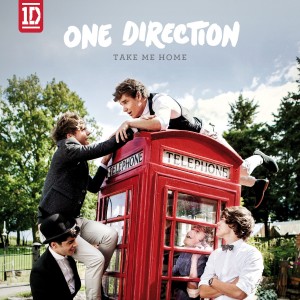 I don’t want to be too extreme here, so, before I really get going, here’s what’s good about One Direction’s new album, Take Me Home: the first song, “Live While We’re Young”, and a few other sure-to-be smash songs that were formulated by a squadron of songwriting gremlins, including “Rock Me”, which shows the group’s lyricism finally taking that step from middle-school “I like you” relationships to post-pubescent sexual desire. Immediately following “Rock Me” is another keeper, “Change My Mind”, one of the only ballad-style songs on the album that doesn’t self-destruct within thirty seconds. “Kiss You” and “Last First Kiss”, besides the fact that I had to listen to them each three times to convince myself they weren’t the same song, are redeemable pop bullseyes. The band has, at the very least, proven that their two or three initial hits weren’t flukes. Even if they’re not an album band, they’re at least, persistently, a single band.

But Heaven have mercy, what happened with the rest of this album? There’s nothing that defines filler more accurately than songs with titles like “Over Again” and “I Would”. Come on (coincidentally, there’s also a song called “C’mon, C’mon”.  These are songs that could be produced by a random pop-song generator. Canned verse, hook with punchy percussion and harmonies by these five-guys-who-all-sound-the-same-except-for-that-one-husky-guy-who’s-probably-too-old-to-still-be-in-a-boy-band, canned verse, hook, hook, on to the next one. Those are the pop thumpers. As for the other ballads, I have this to say: I would have preferred three or four more identical plastic thumping verse-hook-hook clones. These ballads are some of the most unconvincing, superficial, straight-up dumb songs I’ve heard this year. “Little Things” features lyrics like  “You can’t go to bed without a cup of tea” (look at us, we’re British!) and an acoustic guitar, and quite literally does not have a single good quality. The other offender of note, “Summer Love”, the album’s closer, sounds both in lyric and melody like a song a boy-band parody in a bad Zach Galifianakis movie would sing.

But, again: stop listening to me. Stop listening to what anyone says about One Direction. They’re counting stacks, and most of us aren’t. Until the laws of entropy start to apply to their stagnant ooh-oh-ah-laden pop, (which, as long as there are preteen girls alive on Earth, won’t happen) they are impervious to any criticism. They don’t have to care. Which means I don’t either. Give me your worst, teenyboppers of the world. Score: 3.5/10.

2 thoughts on “This review means nothing: One Direction’s ‘Take Me Home’ [Review]”