This is the first of three parts of the Oracle Call of Duty Black Ops 2  review.  This portion will focus on the multiplayer game mode. Look for the second installment reviewing the Zombies mode later this week, and the final portion involving campaign mode next week.

It may be hard to imagine for the common folk, but 200 people crowded around a small store with a DJ, hamburger bus and Red Bull stand, all for a single video game, is rather typical for the avid Call of Duty fan. 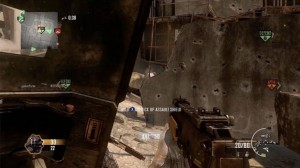 And this  was the case across the country Monday night, as fans around the world flocked towards their local game retail location in order to purchase their version of the newest iteration of the series, Black Ops 2.

The most popular mode for the franchise has typically been the multiplayer mode, which allows players to team up and face off against other people from throughout the globe. Black Ops 2 is no exception.

Upon entering my first game, I was instantly caught off guard to see how much had actually changed. It truthfully didn’t even feel like the same game. For starters, the animations were much more pronounced, yet slower at the same time. The game is faster and the maps are much more open, and it is extremely common to be caught unaware due to several entrances that cannot be covered all at once. Basically, Black Ops 2 has a very unique feel to it, and the difference is almost uncomfortable at times. It seems as though Treyarch, the game’s developer, wanted to change the game as much as possible to dispel the criticisms that the game was too similar from year to year.

They certainly dispelled those criticisms, but was the end result worth it? Unfortunately, I think Treyarch may have made a mistake. As much as people may criticize the developer for releasing similar games year after, the games continue to sell like mad. As they say, if it isn’t broken, don’t fix it. And I don’t think it was broken. Although the guns shoot similarly and the perks are basically the same, a lot still seems to have changed. And seeing how Black Ops 1 remains my favorite Call of Duty all time, I personally wish they would have stuck with what worked.

Now, this isn’t to say the game isn’t enjoyable. It is. Some of the changes are fresh and welcomed. For example, the new create a class system, where players can customize an entire structure on their own is incredibly unique to the series. It allows each individual player to have the opportunity to enjoy their own experience on the game.

I don’t want to completely shoot down the game quite yet (no pun intended), and I am willing to accept change. My only true hope is that, in time, these changes can become something more acceptable and entertaining and can hold the same replay value as the predecessors have before it:  Multiplayer Score: 6.5/10