In 2003,  15 year old Alice Glass was playing a show in Toronto when a man named Ethan Kath heard her, and declared her an ‘undiscovered poet’. As a test, he gave her 5 songs to write and an appointment to record. The sound check from that record date became Crystal Castle’s first EP and it was an overnight hit.

In 2004, Crystal Castles released their first amazing self-titled album and captivated indie crowds across the world with their amazing tunes and deep, dark lyrics.

The album begins with “Untrust Us”. The song  doesn’t have an intro, or a soft beginning at all, and within 32 seconds the album gives listeners their first drop. So begins a chorus with words not many can understand; that’s a recurring theme with Crystal Castles lyrics. Most of the time, they sound like a toddler babbling into a microphone, but with deeper analysis (or looking them up online) they reveal some dark themes. With this song, however, even the band on their official webpage has not released lyrics.

Next is the original sound check from Alice Glass’ first recording session “Alice Practice”. Knowing that there is no outside editing, you can hear her talent. She sings about childhood lessons, like how not to play with dead things or sharp objects.  Really peppy, right?

The band’s most popular song, “Crimewave”, 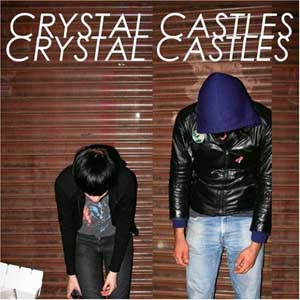 is a collaboration with the group HEALTH. It has incomparable lyrics, but an amazingly catchy tune to compliment it and an surreal drum solo at the end to put a figurative ‘cherry on the top’.

The song that may kill headphone users “Xxzxcux” begins with a blasting tune that often jolts me awake if I listen to the album whilst falling asleep. However, it does contain some of the album’s deeper lyrics. “Just because we don’t feel flesh, doesn’t mean we don’t fear death”

One of my favorites, “Air War” is another song that makes absolutely no sense but the beat and tune make up for it completely. They add in noises reminiscent of 8-bit arcade games that make every note pop that much more.

Stressing more 8-bit sounds and deep lyrics is “Courtship Dating”. Adding to the lyrics and glorious beat, the band adds of all things sounds of screaming to the song which should creep me out, but they are placed so well that it seems completely normal and unintrusive.

Up next is one of the weakest tracks, “Good Time”. Crystal Castles perfects repetition because the original beat is the only thing being repeated. They tweak the beat every few seconds, but it seems they forgot to with this song. It is incredibly bland and honestly annoying.

The most neutral song is “1991”. A slew of beats and tunes are thrown in at well placed times, but the track doesn’t do anything too extraordinary. At this point, when I first listened to the album, I was getting tired of the repetitiousness.

One of the only botched songs is “Through the Hosiery”. This is one of the first songs that I am annoyed by the lyrics/singing. Alice tuned her voice way too high on this song.

The last three songs are more of the same with light electronic tones and saucy lyrics with the exception of the last song which is a nice acoustic serenade from Alice herself. It’s a haunting ending to an amazing album.

As Crystal Castles are becoming more popular, I have only seen progress. The group isn’t changing their style and they are able to keep every song crisp and hot. After months of delay and anticipation, on Nov. 12 they are releasing their fourth studio album and I couldn’t be anymore excited.

Overall, the album is really complex and almost every song differentiates from another. Every song is fresh and exciting. Honestly, it’s my favorite electronic album ever made in the 00’s. 8.5/1o.