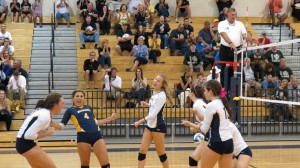 Coming off a disappointing loss to Bloomingdale, the three seniors on this years team, Natalia Campos, Madison Seuzeneau, and Kayla Shaw, ended up with a win in their last night of volleyball in the Warriors home gym taking down the Durant Cougars.

“(When I stepped on the court for the first time) I was really excited. I just wanted to do my best and do my best for the team,” said Shaw.

The first set seemed to be the tone setter, the lady Warriors took it 27-25 after having multiple set points. The second was a walkover 25-13 win for the Warriors, but Durant wasn’t done quite yet. They rallied to win the third 25-21 after leading by a solid margin the whole way. The lady Warriors refocused in the fourth, the set was tight down to the wire, except this time Durant was getting the set points, finally capitalizing and sending the match to a fifth set 27-25. With the final set being to 15, a quick start is key. The Warriors won the first seven points, going on the hold off a Durant comeback and win 15-12, three sets to two.

“I was really nervous, happy, and excited. I wanted to get out there and play and show what we can do,”  said Campos.

Seuzeneau put out the best offensive performance with 21 kills and nine attacking errors, off the bench sophomore Avery Bradshaw had 14 kills and only one attacking error. Both players had a block as well. Brooke Royals had 51 assists, the second most in a match for Royals this season. Campos had problems at times digging Durant front line player Lexi Thompson (28 kills), ending up with 10 digs and nine digging errors.

“I’ve made lifetime-long friends here at Steinbrenner and all of my friends are on the volleyball team. I wouldn’t trade it for the world,” said Seuzeneau.