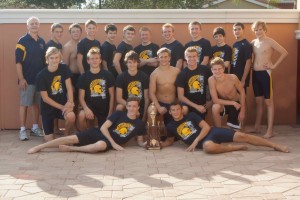 Earlier this season the team lost to plant, still their only loss of the season, but first year head coach Bill McKeon says his team was ready to reverse that result.

“We came in there prepared thinking we might get second, Plant High School slipped up a little bit, we were right there and snuck in and won,” said McKeon. “We didn’t realize we were going to win…when its a surprise like that it gets everybody excited.”

Team captains Michael Ward and Austin Childers (winner of the 100 butterfly) were key parts of the success according to their coach, as well as freshman standout Tristan Hazlett who won two events.

“It really felt good for us to be number one and on top at that meet,” said Childers. The win actually put the first ever trophy in the trophy cabinet of the young and rising boys swim team. According to McKeon, the win will have far reaching influence on the teams future.

The team is 7-1 and has aspirations to put two or three swimmers in states later this year.