Even people who don’t like or know much about art appreciate the paintings of Salvador Dali; there’s something precise and colorful about his surrealistic style of painting that draws even the most disinterested or uneducated observer into a brief visual rapture. This universal influence is the mark of a truly great artist, and is thus very rare. Seattle rapper Macklemore is an exemplar of such artistry in modern hip-hop; together with skilled producer Ryan Lewis he’s managed to burst forth from a six-year mixtape grind into the #1 slot on iTunes with the duo’s phenomenal debut album The Heist. 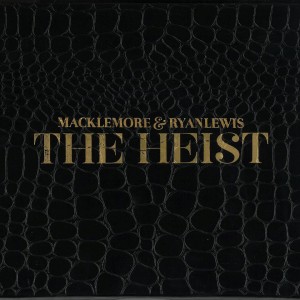 What gives Macklemore and Lewis such an allure? On first listen, one might say it’s Macklemore’s enlightened rapping. He’s candid, honest, and verbose when he speaks on such topics on same-sex marriage (the beautiful “Same Love”), the state of the 21st century drug culture (“A Wake”) and materialism as it concerns Nike shoes (“Wing$”). Without any indication of artificiality, each song contains a touching moral or emotional vein. Macklemore is autobiographical, clever, and persistently intelligent. “Starting Over”, lyrically the album’s best track, listens like a prose narrative magically given rhythm, and concerns Macklemore’s relapses into cough syrup addiction after the release of his seminal recovery-cented song “Otherside” (not included on Heist). Nowhere have I found an MC who can be so honest in plain English.

Even better, he’s not afraid to have fun: “Can’t Hold Us” is a cathartic driving anthem, and “Cowboy Boots”, though an odd choice for the closing song, is simply about drinking Pabst at a bar and not much more. Just like Dali, Macklemore proves himself among the most deft and versatile artists around. Even those who don’t like rap will be touched by the humorous “Thrift Shop” (a celebration of dressing for cheap), and hip-hop veterans would be lying if they said they weren’t impressed by Macklemore’s nonstop dissection of the record deal process on “Jimmy Iovine” (named for the CEO of Interscope Records).

One might also cite Lewis’s unique production — horns, seamless guest-artists on every hook (I guess Macklemore doesn’t like that), and memorable synths (see “Make the Money” for an outstanding example of Lewis’s production talent)– as an important factor in the barrage that is The Heist. Neither the lyrical nor the instrumental components of the album’s songs are left hanging out to dry. If hip-hop aficionados don’t know about this duo, then they should, and I believe they will soon. With The Heist, an indie MC who showed occasional promise has put out a consistently strong and touching effort that, if American listeners can handle this level of honesty, insight, and emotion, should make waves in the world of hip-hop, and the world, period. Score: 9/10.