So, what were some of your top high school memories? 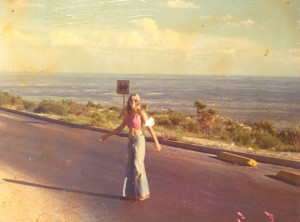 Definitely the clubs, the events and the things that happened are the things that I’ve taken away. I mean, I had a great education, and that’s obviously very important. It would be silly for me to downplay that, but I think that things like participating in chorus and being a member of- you might imagine- Future Teachers of America and, actually, also Future Business Leaders of America. The social aspect is just huge, and it’s what you carry with you. I was also active in my church. I was always involved, always helping out at community centers and various events.

What influence did your principal have on you?

He had a big impact. His name was John Grimsley, and his wife was

actually my second grade teacher. He was my principal both in elementary school and in high school. I just admired him. He had a very fair attitude about things. He really was willing to allow students to do different things. Very strong leader.

Do you think that how he ran a school ever correlates with how you do?

Honestly, I can’t say that, because the experience there was so very different than anything I’ve experienced as an educator. My school was very small, only about 600 students. I’ve never taught in a school that taught fewer than 1,500, and that was the year we opened with no seniors.

Where did you grow up?

I grew up south of Ocala.

If you could have chosen any other occupation back then, what would it have been?

I didn’t actually plan on going to college until the middle of October of my senior year. I was very determined that I would become a very good clerical employee for someone in the government in Washington D.C. I was very interested in government and politics. I was also interested in maybe pursuing law.

How would you compare students and the educational system from back then to today?

There are a lot more opportunities for students regarding course work. We didn’t have the advanced placement courses, so the opportunity to earn college credit didn’t really exist. That’s a huge difference. I think that the rules, oddly enough, haven’t changed much in terms of what students are required regarding behavior. There are different social opportunities. I think that back then, regardless of the size of the community, school dances were very typical, and they happened frequently. But there was less on-campus activity for students.

Did you have a high school sweetheart?

Sure. [Laughs] Two people come to mind, actually, that I dated. I wasn’t allowed to date in freshman year; that would have been unheard of. However, my junior and senior year, yeah.

Were you a good student?

I was a good student, sure. We had a small senior class, but I graduated fourth. I enjoyed school, so it was not a problem to do well.

Did your English teacher have an effect on you?

She had a tremendous impact on me. Her name is Roselyn Davidson, and she still lives in the community where I went to school, although she’s retired now. She was a recent college graduate when I was in her class. She was my 11th and 12th

grade teacher, and she really exemplified great qualities of an educator and really inspired me to go into the profession.

Did you have any regrets in high school?

Not really… I know that seems like a pat answer, but I really had a great time. I guess the only thing that was sort of intimidating for me was physical education. I really didn’t enjoy having PE every school day all four years, but I actually learned a very valuable lesson from one of the PE teachers that I had my sophomore and senior year. I kind of hated to do things that I wouldn’t excel at, but through her efforts, I learned that you don’t have to be the best as long as you’re doing the best.

What is some advice you’d have for students going forward?

Don’t be afraid to do something new, or something you might consider challenging, because that’s how we learn. That’s how we develop skills and get better at things. But also, just be aware of the opportunities that are there. We take things for granted, because it’s a part of our daily life, and sometimes we don’t realize how much potential there is. I think so many young people fail to see their potential, because they are limiting themselves sometimes in what they explore and try to accomplish.

Now, do you see any difference in the psychology or the attitudes of students compared to when you were in school?

People say that sometimes young people have more challenges and stress today. You could base that on the fact that there is more rigorous course work. However, my response to that is that you’ve always come up with that. It’s not like suddenly you were expected to work with this level of rigor; you’ve been raised with that. I think young people are dreamers, and they certainly were when I was young. I think young people have vision of what they can be, and what part they can play in that, whether they really articulate it or not, I believe that’s there in a young person’s mind. I think they sort of look to the future and see themselves accomplishing what they set out to do, and I think we’ve always done that. I think we struggle to form our own identities when we’re young, because we’re so influenced by family and friends, and I think we find our comfort or our solace or our guidance in whatever we love, whether it’s poetry and literature or music or whatever it might be, even athletics. We look for that outlet that explains us to the world and explains the world to us.

One thought on “Back in the day with Principal Brenda Grasso”