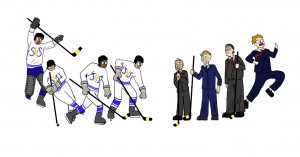 Athletes take an immense amount of pride in what they do and, naturally, they desire recognition for the hard work and incredible dedication they put into their craft.

However, on rare occasions, this is not the case.

Let me quickly begin my argument by conceding that the quantity of support this school’s staff and student body gives to official sports is very respectable. It legitimately causes envy in students that do not get reciprocal treatment.

The district is debating whether to make lacrosse a Florida High School Athletic Association (FHSAA) recognized sport, according to assistant principal Eddie Henderson (he was unable to confirm whether lacrosse had been admitted as of press time). While this does not necessarily mean it will become an official sport, and it is difficult to predict the end result, they have made a significantly larger amount of progress than other teams hoping to get the same acknowledgement- notably, the hockey team.

This school’s hockey team has been working diligently since the conception of the school. In only our second year, we made it to the state championship, despite the lack of attendance at our games due to an inability to advertise them at school.

“I don’t think it’s fair that we work as hard as other teams, and don’t get any recognition like the other sports at our school,” said senior defenseman Patrick Skirpan, who has been on the hockey team since his freshman year.

We have continually been put through pep rally upon pep rally, congratulating teams on their success and discussing their current seasons. Any time we have attempted to be recognized at these assemblies, we have been told we must be an official sport. The catch is that we may not become an official school sport because of problems such as equity and gender equality.

Regarding the former, sure, hockey is expensive. But why is that even a variable when we have over 20 guys willing to pay the price to represent the school they love in the sport they love?

Regarding gender equality, the team has never discriminated against girls. The fact that they have never tried out or attempted to make their own team puts the puck on their end of the ice.

Besides, there is already a sport that is officially recognized, but doesn’t cater to both genders. Ever see a boy’s volleyball match at this school? Me neither.

The case is the same for hockey. We have never had a girl try out for the hockey team. When a girl does, I am sure that the coaching staff will dissect the situation. If the girl in question is of more value than their male counterpart, she will make the team. She is in the exact same position as all other hockey players attempting to join the team. The best 18 players will make the hockey team, not necessarily the best 18 boys.

There is, however, one essential misconception regarding our argument. We do not actually want to be a FHSAA regulated sport. This might seem to make our entire debate null, but the opposite is true.

We already have an organization, the Lightning Conference, which does an exceptional job of running a league of 18 teams representing over 20 schools (some teams combine schools with close proximity in order to have a larger pool of players).

The league gives high school players the opportunity to play in the local professional stadium, the Tampa Bay Times Forum, where the Tampa Bay Lightning play. Through regulation, we may lose opportunities like this and may even lose some of the league structure that we have come to appreciate so much.

“I like how the league is run. Playing in the same place as some of our idols is a great experience that some of the other sports don’t get,” said senior forward John Michael Buchs. This year marks Buch’s second year on the hockey team.
We aren’t asking for a new organization to develop a new program. All we want is the interschool attributes that make playing high school sports so wonderfully entertaining.

What we want is to have our fellow peers educated on the subject of the location and times of our events (free at TBSA in Oldsmar most Friday nights, for those of you who didn’t know).

5 thoughts on “Hockey left out to dry”