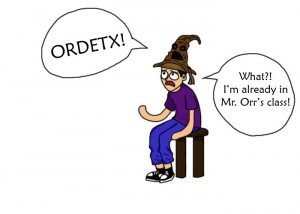 The 20th day count schedule changes have recently created an uproar among this school’s student body. The changes were enacted in order to balance crowded classes. Students complain that the changes came too late, after they had grown acclimated to their schedules.

According to assistant principal Kelly King, administrators made the change in accordance with the district policy which dictates that schools cannot balance classes before the 20th day of school. After, schools receive funding to add more classes where necessary.

Students’ primary concern regarding the changes revolves around being switched into different teachers’ classes. Many students argue that the change will hurt their performance, since they have grown accustomed to their former teachers’ teaching styles. What students seem to be forgetting, though, is how easy it was in the first place to adjust to those styles. Given two weeks or so, students will most likely readjust to their new teachers’ instructional methods.

Other students claim that the social aspect of their day is now disrupted. This complaint need not even be addressed; school is for learning, not playing.

An unfortunate consequence of the changes is locker locations. Students chose the location of their lockers based on their schedules during the first and second week of school. Now, though, new schedules may disrupt students’ daily locker routine. This may be annoying and inconvenient, but it can be remedied by changing up locker stops. According to King, students can request a locker change if completely necessary. However, students face obstacles in school that are far more challenging than a minor locker problem, so this should not be too much trouble for most.

Schedule changes are practically part of the high school experience. Every student who received a schedule change still has the exact same classes. Although it is unfortunate that some students feel that their new teachers are not as talented as their former teachers, having a mediocre educator or two is inevitable in high school. You get some good ones, and you get some bad ones. On a social level, the change is harsh, but in terms of educational success, the changes probably will not make a significant difference for students.