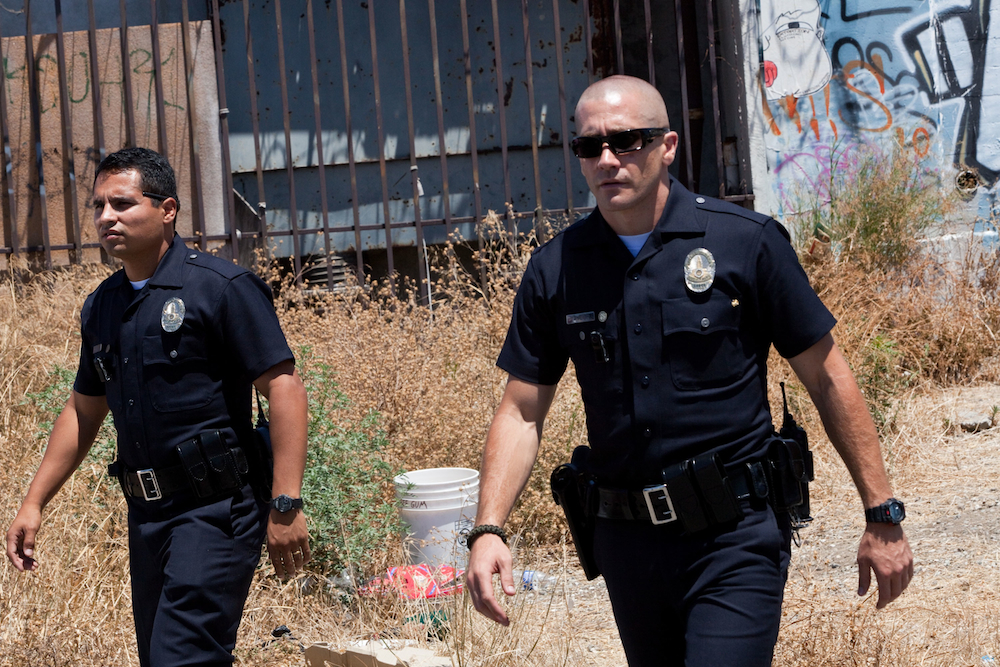 End of Watch opens with a bald-faced encomium to the LAPD with Officer Brian Taylor (Jake Gyllenhaal) delivering a terse description of his duties as an officer: “You will beg, you will plead, you will do everything in your power to take advantage of my sympathy. It is my duty to ignore your efforts and arrest you and bring you in.” But Taylor doesn’t leave us with a cold impression, and he follows up his matter-of-factness with a reminder that, “I am a human, too. Beneath this badge is a beating heart. I have thoughts. I have feelings just like you.”

If you saw the trailer for End of Watch, though, you’d be baffled by the movie that unspools on screen. It’s not a bevy of gunfights and gang violence, nor a rock-’em, sock-’em buddy-cop movie. Instead, End of Watch is an altogether better flick than I expected from the usually conventional writer-director David Ayer (Training Day, S.W.A.T., The Fast and the Furious), who delivers an interesting portrait of two LAPD police officers in a found-footage tale akin to Clerks-meets-COPS.

Taylor and his exuberant partner Mike Zavala (Michael Peña) have been close friends since their days at the police academy, and now as partners have proven themselves to be gang-busting champions and town hall heroes. Taylor is documenting his travails as a police officer on and off the job with a video camera as a project for his elective film class while he pursues a law degree, so what we get is a lot of rough cuts and home-movie aesthetics to guide us through the daily lives of Taylor and “Z,” as his partner is often called.

About 75 percent of the narrative in End of Watch takes place in Taylor’s and Z’s patrol car, manifesting itself in conversations about the mortality of their jobs, the differences between white families and Mexican families, love, dreams, hopes. This unforeseen, unmarketed dynamic between our main characters is a veritable treat, and the chemistry between Gyllenhaal and Peña brings a naturalism to roles that otherwise might be carbon copies of every cop role ever played by the likes of Denzel Washington or Bruce Willis. (Full disclosure: no one plays cops like Willis, which is why it would be a sin to try and imitate him.) These are the kind of police officers that I think few people expect to hear on the beat — humorous and full of vitality for life outside the uniform.

There is a rough gangland plot that weaves its way between the extended dialog scenes. These are primarily tense shootings and sporadic acts of violence between rival black and Mexican gangs (as well as some gruesome work between a knife and an officer’s eye) that appear disparate, but they crescendo into a code-red feud on the streets of South Central, eventually roping in the seemingly invincible Taylor and Zavala. They plunge headlong into the storm of bullets even amid the dawn of a marriage engagement between Taylor and his charming fiance Janet (Amy Adams) and the arrival of Zavala’s newborn daughter.

“Kill your darlings,” wrote Faulkner on the topic of writing. The same maxim applies to genres, which often constrict but is here transcended. Rarely do buddy cop movies have this much soul and such a superior fusion of character and story; more conventionally, action substitutes for drama or real human tension in these sorts of films. The sheer force of Peña’s and Gyllenhaal’s performances and the strength of the dialog in End of Watch make a strong case against calling guys with badges “pigs.” Score: 10 / 10.