“So this is my life. And I want you to know that I am both happy and sad and I’m still trying to figure out how that could be.” 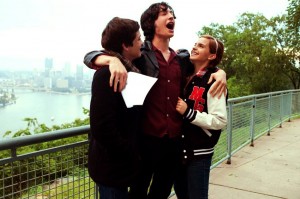 Although some may detest the typical plotline of a novel following the story of yet another white suburban misfit, they have to admit that Stephen Chbosky’s bestselling book The Perks of Being a Wallflower successfully stands out from the clichés. The book, set in letters addressed to the reader, begins with narrator Charlie explaining his desire to remain anonymous, and then describing his grief over the suicide of his friend a few months ago. He can’t rely on his family for support because they are each busy with their own problems, and the only relative Charlie ever felt close to, his Aunt Helen, passed away when he was seven.

Right from the beginning Charlie is very straightforward with the reader and it’s evident that he is overlooked by everyone around him. As a quiet observer, Charlie works to “participate” more in his life. He meets step-siblings Sam and Patrick, an adventurous duo, who introduce him to the exciting world of friends, music, and drugs.

Charlie’s English teacher gives him several books to read, which influence his way of thinking tremendously. He learns that Patrick had a relationship with the football quarterback and that they had managed to keep it quiet. As Charlie learns more about the people he meets, he confides in the reader and makes sure to mention his love for novels, music, and poetry, and his incessant affection towards Sam.

Perks includes several references to drugs, alcohol, sex, and some foul language, although not in the sloppy manner of most contemporary novels. The plot centers on the issues that most high schoolers face without coming across as unoriginal or smutty.

The way the narrator speaks to the reader and the epistolary structure of the book both create a more personal connection to the story. At times Charlie can come across as peculiar and a bit theatrical, but this is mostly due to his traumatic experience, not revealed until near the end of the novel.

Chbosky does a superb job in developing his characters, and gives us a great insight into their lives without switching perspectives. He creates the perfect balance between humor and honesty, and makes us feel as though we personally know every character through Charlie’s angst-filled letters.

It takes a certain level of maturity to read and understand the book, so younger readers should wait a while before approaching it. Perks will soon be out in theaters and will feature Logan Lerman as Charlie, Emma Watson as Sam, and Ezra Miller as Patrick. Score: 8/10.