When people think of local bands they think of young musicians trying to “make it big”, but some might forget the musicians who perform just for the love of music and not for the money.

Meet senior Justin Geilen, the lead singer of Steinbrenner’s own band, NO RECESS. Students may recall them from last year’s talent show, where they won the “audience choice” award, and from their performance at the last Relay for Life. His band consists of Geilen’s good friends, juniors Roger Arroyo and Jay Rich; they have been a band for a little over two years. Geilen says he grew up around music; it has been a constant inspiration for him. 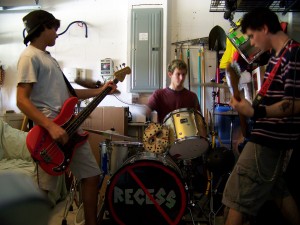 “Always being around [music], it’s almost like my first memory,” said Geilen.

With musical influences like Green Day, Blink 182, and Smashing Pumpkins, the old-school, punk-rock sound this band has blasting out of their speakers is no surprise. Their choiceo of sound is very punk, and Geilen’s voice bears a striking resemblance to Green Day’s Billie Joe Armstrong. “I get that a lot,” Geilen replies to the comparison. “I think at the start it was [intentional], I was putting a lot of emphasis on his accent just to help Jay out with learning the songs and whatnot, and I will admit that some of it kind of stuck with me but when I sing it’s all me I’m not trying to do anything.”

Even though the band doesn’t perform regularly, Geilen says he plays with his band because it’s something that he loves to do — he has no plans on “making-it-big” or gaining popularity in the music industry, but also stated that if given the opportunity to be signed to a record label he would “definitely take that deal.”

NO RECESS’s set list consists mostly of covers from their favorite artists. However, Geilen revealed that the band is currently working on original music and hopes to be releasing an EP or a full-length album sometime in the near future, when all of the song structures and hardcopies are down.

It’s admirable when someone aims to stay true to themselves when exposed on such a vulnerable stage. “I’m not trying to gain popularity, I’m not trying to gain money, I’m just in a band playing music because that’s what I like doing. If people like us great, but if people don’t then that’s good too. It’s about what I want and not what everybody else wants,” Geilen said.

Below is the transcript of the Oracle’s interview with Justin Geilen about his band, NO RECESS.

ORACLE: How did the band form?

JUSTIN GEILEN: It first started off with me learning an instrument, wanted to do it for so long. It eventually infected my best friend Jay who, at the time of interest, received a drum set from next door so he got to play on that and practice, he’s gotten really good. My other friend Jason, who was our bassist, had been learning guitar at the time as well and he just transferred over, we found a new bassist Rodger and he’s done the same thing, he started with guitar and now he’s on bass.

O: What motivated you to take up music? What started it all?

JG: Always being around it, it’s almost like my first memory.

O: From watching your band’s videos, it’s pretty obvious that Green Day is a big influence.

JG: Yeah Green Day would be one of the big ones. It’s really well hidden, but if I had to place a favorite band it would be Smashing Pumpkins, which is a completely different sound.

JG: They speak to me a lot, spiritually. It just makes a lot of sense. It relaxes me.

O: What’s your favorite song from them?

JG: It’d definitely have to be “Hummer” off of the Siamese Dream album.

O: Even though you’re a big fan of Smashing Pumpkins you do a lot of Green Day covers and you sound a lot like Billie Joe …

O: And I was wondering, is that intentional or is that just how your voice sounds when you sing?

JG: I think at the start it was, I was putting a lot of emphasis on his accent just to help Jay out with learning the songs and whatnot, and I will admit that some of it kind of stuck with me but when I sing it’s all me I’m not trying to do anything.

O: Do you perform regularly?

JG: No definitely not.

O: Well when you do perform, is it for fun or are you trying to actually ‘make it big’?

JG: No I’m definitely doing it because it’s what I like to do, I like to be on stage, playing guitar.

O: Would you ever want to be signed to a record label? If you had the opportunity offered to you?

JG: Of course; Yeah I would definitely take that deal.

O: Along with being a local and unknown band, there are going to be people that just don’t really care. How do you deal with that, what are some of the positives and negatives about that whole scene?

O: When you’re on stage what’s going through you head? Or even before going on stage, is there a certain thought process that happens?

JG: Before it’s a big rush, your insides get a little bit tangled. But once you get on there and you play your first or second song, you get comfortable and then you can finally start letting loose, be yourself. But I don’t have a certain thought process, I don’t have anything specific going through my mind.

O: How was your very first concert?

JG: The first time all of us played together actually live was at the talent show last year, and I think that turned out pretty good. We got the audience vote; I think that’s what it was. Yeah I think we did pretty well, except (laughs) Jason’s bass strap broke off during the performance so he had to like maneuver that but he recovered well.

O: On average, when you do perform, about how many people show up?

JG: On average we can probably get like 25 people in there. But that’s just like, “hey come see our show”, I’m not counting the people who really show up.

O: Do you write original music?

JG: Yes we are working on originals.

O: Are you planning to release an EP or a full length album?

JG: We don’t really know what we want to do right now, I think right now we just want to get our song structures down and have those hardcopies down. Before we do anything I think after we get a couple before we decide what we want to do; but yeah, I’d like to do that.

O: What kind of style or what type of genre would you make it?

O: What are your expectations for your musical career in the future, if you plan to have music as a career?

JG: I haven’t really thought about it that far in depth but I’d have to say, do what everyone else is doing; keep writing, keep releasing. Just have fun with it.