There’s something breathtaking about listening to rapper Aesop Rock. I don’t mean breathtaking in the sense of looking out over the grand canyon or listening to a Mozart crescendo, I mean breathtaking in the sense of having your car’s breaks malfunction and barely surviving a slide down a black-iced hill. His wordplay, whose complexity has always been the defining characteristic of his music, simply leaves one exhausted, yet hungry for more. Common line: “Babysitter cop beef reverend / Body glitter botched C-section”. After a five-year hiatus since the release of his last album, None Shall Pass, one might expect that the literate MC had undergone some kind of artistic metamorphosis, but in fact, the opposite is true. With Skelethon, Aesop has returned with nearly an hour of the same gut-punching wordplay. He’s been doing this for over a decade now, and he doesn’t sound tired in the least. 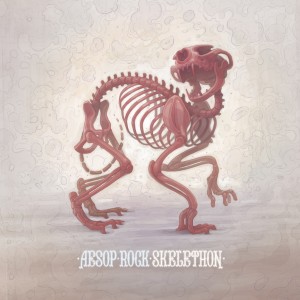 Certainly, Aesop Rock is not for everyone: some people like their rap to be empty of metaphor and medical diction, and that’s okay. If you’re not okay with lines like “Zero friends minotaur fugly stepchild / Evoke lunch jumped over plunging necklines”, don’t venture any further. But if you are, then know that this album consists of some of Aes Rock’s best material ever. The line I just quoted was off the phenomenal single “Zero Dark Thirty”, which, like a lot of other songs on the album (“Tetra”, “Cycles to Gehenna”), one must study if one wants to decode its meaning. Aesop is nothing if not dense, but even in the most highbrow and complex of his rhymes, there is meaning. He is not just goofing around with syllables here.

Take, for example, the first line in the opening song “Leisureforce”: “Postcards from the pink bath paint leisure”. Senseless? Hardly: he’s talking about thoughts in the bathtub where he’s nearly slit his wrists, turning the bathtub pink. The rest of the song consists of a breakdown of his time spent in solitude making music on his computer and fighting with suicidal thoughts. While an ugly beat ruins the song’s effect, it’s immensely autobiographical, unusually so for Aesop, and its mediocrity is excusable, because the next nine tracks are all instant classics, haunting and varicolored, without a misstep until the awkward “Homemade Mummy”.

There are of course the usual rhyme-blitzes of the sort that filled None Shall Pass (see “Saturn Missiles” and “Crows 1”, which includes a haunting robotic hook from Aes’s good friend Kimya Dawson), and songs like the excellent “Fryerstarter”, which I’m pretty sure is about a donut shop that’s also a Satanic cult. With Skelethon, however, Aes has given us a few gems of a sort we haven’t seen before. Like “Leisureforce”, in a few of the album’s songs he is intimately autobiographical. “Ruby ’81” is a lucid standout about Aesop’s baby sister being saved from drowning by the family dog (“Off into the yawning blue, the splash would mum the rocket ships / Ruby’s lungs were filling by the time her kin were cognizant”) that stops the listener in his tracks, and “Grace” is a hilarious tale about young Aesop not wanting to eat his green beans at the table. In both of these songs Aesop refers to himself by his real name, Ian, displaying a candidness never before shown in his music.

This autobiographical vein details Aesop’s challenges in adjusting to society, the music industry, his family and his romances until the end of the closing track “Gopher Guts”, where he speaks over a lull in the beat: “I have been completely unable to maintain any semblance of a relationship on any level. I have been a bastard to the people who have actively attempted to deliver me from peril.” Here, from the confines of the cabin he details in the album’s first song, he has combed the depths of his mind and presented it to the listener. Aes has not lost his edge; with Skelethon, he makes a triumphant return, and his honesty works to his advantage. The album is full, fast, ferocious, and unusually frank. Score: 7.5/10.