Edward Sharpe and the Magnetic Zeros, to be quite frank, came out of nowhere. They’re the huge (at least 10 full-time members) and impassioned group behind the universal hit “Home”, a down-home anthem that’s been featured everywhere from Gossip Girl to IKEA commercials. Behind “Home”, however, was a little-known debut album called Up From Below that featured quite a few little gems, albeit with a sloppy production. 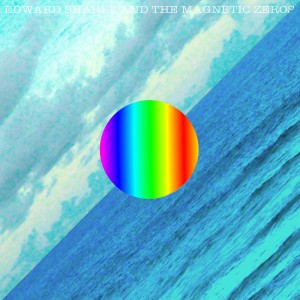 Now, after three years, the group is back with Here, a sequel album that certainly doesn’t deviate much from the group’s ragged, deep-fried gypsy aesthetic, replete with tambourines, coyote-esque background vocals, and jiggy choruses like the one on “I Don’t Wanna Pray”, a lackadaisical praise of disorganized religion. “I love my God, God made love … But I don’t wanna pray”, Ebert sings. Neither has the band eliminated the cheerful banter between singers Alex Ebert and Jade Castrinos, who met and fell in love in 2007 while Ebert was recovering from drug abuse. It’s their duet that made “Home” such an enduring hit, and they’re back again again on the even sillier “That’s What’s Up”, where the couple’s wacky, deep-fried love is in full swing.

Up From Below also included a certain latent spiritual element, especially in fantastic tracks like the raging “Kisses Over Babylon” en español and the final track, the overjoyed “Om Nashi Me”. Though there’s no sequel to “Om Nashi Me”, the group’s spiritual passion still pours through their lyrics and vibrant backing instruments. “Paradise has its hunters / Call me wise, call me fool / I don’t mind chasing thunder / I say reaching for heaven is what I’m on Earth to do,” the duet sings along with a soft set of backup vocalists. It’s uplifting, empowering, and relaxing all at the same time: on songs like “Mayla” and “Dear Believer” (the quoted), the group is in its ethereal element, and can do no wrong.

The biggest criticism I could level at earlier Ed Sharpe works, besides the shoddy production quality, was that Up From Below was a baggy album with plenty of songs that were fluffy or else just didn’t stick. Here, however, cleanses the group, which on this album especially recall their professed influences of the free-love music communes of the 60’s, of both those sins. The production feels much cleaner and less foggy, much more present, and, at just 9 songs, there’s very little that won’t stand the test of time (except for the low-profile “Child”). There’s not the slightest lapse in the cool, lapping-waves vibe of the album, refreshing like the scent of wildflowers and pine needles.

The passion was there, and the last three years have done nothing but aid its successful expression. Other than the godawful color gradient on the album cover, Here is too fun, too simple and nice, to deserve any crippling criticisms. For proof of this, see the sentimental, overwhelmingly genuine final track, “All Wash Out”, which closes the albums with soft strums and whimsical whistling. Without missing a beat, Ebert and his band of tambourine-shaking rascals has hopped right over the sophomore slump. Score: 8/10.