I grew up a huge All American Rejects fan. Out of all the overplayed, flippy blonde hair filled boy bands, AAR was always my favorite. I don’t listen to them as much anymore, but was pretty excited for new tracks. After a four years since the last album, (When the World Comes Down) the All American Rejects released Kids in the Street on March 27th. I have never heard such washed up, synthesized music in my life, nor been so disappointed.

The first song, “Kids in the Street”, is so auto tuned, my ears bled. It talks about the band’s childhood of being kids in the street and getting so high they got lost coming down. 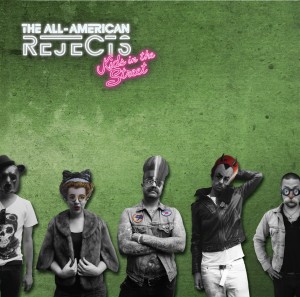 The bands past two albums (When the World Comes Down, and Move Along) consist of mainly happy, upbeat lyrics about girls and relationships. Bringing drugs into a new album was just plain weird.

Simply put, the new All American Rejects album should be kept a dirty little secret. With weak vocals, cheesy lyrics and absolutely no talent instrumentally, one becomes curious how AAR is still together, and if they’ll manage to make any money off of this album.

AAR used to be a typical nice guy appearance boy band but the third track “Beekeepers Daughter” has lyrics of, “you’re a pretty little flower, I’m a busy little bee” and “Monogamy’s not a part of me” and sounds like a cross between a Barney song and a Kanye rap.

It’s curious that this song was all about playing girls, when the lead singer Tyson Ritter has had the same on and off girlfriend for the past six years.

One of the last songs, “Bleed Into Your Mind” is the only thing that sounds slightly decent, and comparable to the old songs they produced. It was catchy with fun lyrics of “While you put yourself together/ pieces of you slipped away” but was still nothing extraordinary. Score: 2/10