WARNING: THIS REVIEW CONTAINS SPOILERS REGARDING THE MOVIE THE HUNGER GAMES. IT IS INTENDED FOR THOSE WHO HAVE ALREADY READ THE BOOK BY SUZANNE COLLINS.

No movie will ever fully live up to the books they’re adapted from, and The Hunger Games is no exception. But by its own merits, the film was a wonderful portrayal of the tribulations and calamity depicted in the book. Many things that occur in the book were carefully included in the movie. But there was some omission of important details that could have easily been included. 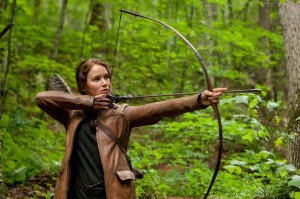 The opening was a clever way to introduce what the Hunger Games actually are. The character relations are built immediately; for instance the tension displayed when Katniss Everdeen (Jennifer Lawrence) volunteers as tribute for her little sister, Primrose, shows how close they are as sisters. Lawrence was a perfect choice to play the part of Katniss but failed in her acting to demonstrate the torture she endured from dehydration and starvation. Hutcherson was an unexpected pick for the part of Peeta Mellark, but his on-cue acting added to the dramatic events going on in the Games.

During the reaping, in which the tributes for the Hunger Games are chosen, the clip that the government shows to the districts introduces why the Hunger Games occur and explains the control and power the government has over the country.  Some of the key details were uniform in the book and movie, something very impressive considering most movies fail to do this. The moment when Rue (Amandla Stenberg) was killed in the forest could have been better introduced that Rue was a symbol of Primrose. Therefore the death was of great significance, but the detail of Katniss decorating Rue’s body with flowers was vital since it was another symbol of rebellion against the government.

Admittedly, most movies that are created after books are not completely precise. Katniss should have received the Mockingjay pin from the daughter of the governor of District 12. This is tied to one of the later books and the fact that she gets it from the Hob of her district makes it lose the importance it has in the books. Another interesting detail that was attempted but not fully portrayed is the mutt mutations toward the end of the games. Each mutt was supposed to be a mutation of the fallen tributes in each district. This missing aspect is one of the clever events author Suzanne Collins created. The movie’s version just minimizes how appalling the government is. The biggest problem with the movie was that the ending was not accurate. The end of a sequel book is an important transition that should have been considered during the making of this film. It only leads me to believe that the next movie will not be as accurate as the first, considering most of the second book Katniss and Peeta Mellark (Josh Hutcherson) are not on good terms. Score: 9/10.