Two authors, from different countries, writing in different languages, have managed to explore extremely similar themes, each without being conscious of the other. These similarities speak of the innate nature of all men, the philosophical rivers we all travel down (as Emerson says, “omne verum consonant”, or “all truths agree”), and the themes enlightened men are likely to explore. 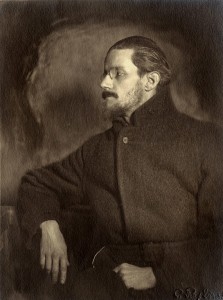 The two books in question are Siddartha and A Portrait of the Artist as a Young Man, by Hermann Hesse and James Joyce respectively. One deals with a monk in India and the other with a budding writer in Ireland, but nevertheless their protagonists go through more or less the same cycle: after becoming preoccupied with sensation and pleasure, both Siddartha and Stephen Dedalus enter a stage of hedonism and pleasure-seeking, where they seek out sex and alcohol and become extremely self-indulgent. After reaching the polar end of this extreme, they both experience a “revulsion from the flesh” as per Joseph Campbell’s The Hero with a Thousand Faces and devote their lives to religious experience, asceticism and self-denial. Actually, Siddartha does it the other way around, first choosing asceticism and then hedonism, but the central lesson here is the same (perhaps it is even compounded by the reverse order): absolutism with regards to life philosophy does no good: one can neither give entirely in to temptation nor hide entirely from it.

The Buddhists already know this, and they spell it out in their doctrine of the Middle Way: taking the central path between two opposites (in this case, asceticism and hedonism) as the only way to live. But it was surprising to see the same

lesson embodied subtextually in Joyce’s Portrait because that book mainly concerns Christianity. Although at the same time it’s not surprising, because reading varying bodies of work has shown me that synthesis between the ideas present in differe
So are the enlightened man and the artist the same? Perhaps realizing one’s own Buddha-nature is the path to realizing what art truly expresses the light inside us all, which would be an equating of attaining truth and attaining beauty (enlightened man and artist respectively), which leads me back to the ending lines of my favorite poem:nt texts is inevitable. Joyce uses the Middle Way without knowing it, and he uses it to develop the idea of the true artist, who neither wallows in lust nor denies his sense of sensual beauty to isolate the soul.

“Beauty is truth, truth beauty,” – that is all
Ye know on earth, and all ye need to know.