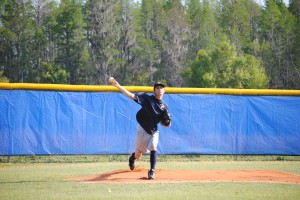 TAMPA – It couldn’t have been sweeter for Steinbrenner, even if it was a preseason game. The Warriors defeated Jefferson 2-1 in walk-off fashion to begin the 2012 season.

The Warriors, who lost to the Dragons 2-1 in the 2011 Class 4A-District 9 semi-final, got off to a fast start as senior Patrict Hahne opened the scoring with a sacrifice fly to score first baseman Chase Turner for the 1-0 lead.

After former-Warrior AJ Silva hit a bomb into the parking lot to tie the game at one apiece, the Warriors had one shot to win it in the bottom of the seventh inning.

With Nick D’Ambrosio standing on second base, Nick Ringo knocked a blooper into the outfield to win the game.

Junior Logan McKnight and Marcus Begg paced the offense with a pair of hits and a double.

One thought on “Baseball: Steinbrenner enacts revenge on Jefferson with 2-1 walkoff win”