Feb. 3 marks the release of fresh movies hot out of the oven from England with Daniel Radcliffe’s starring role in something that doesn’t involve Voldemort and a promising, though fairly common, movie about three friends who acquire superhuman abilities.

The Woman in Black

Arthur Kipps (Daniel Radcliffe), a widowed lawyer whose grief has put his career in jeopardy, is sent to a remote village to sort out the affairs of a recently deceased eccentric. But upon his arrival, it soon becomes clear that everyone in the town is keeping a deadly secret. Although the townspeople try to keep Kipps from learning their tragic history, he soon discovers that the house belonging to his client is haunted by the ghost of a woman who is determined to find someone and something she lost … and no one, not even the children, are safe
from her vengeance. (C) CBS Film (Premieres Feb. 3, wide release)

Three high school students make an incredible discovery, leading to their developing uncanny powers beyond their understanding. As they learn to control their abilities and use them to their advantage, their lives start to spin out of control, and their darker sides begin to take over. (C) Official Site (Premieres Feb. 3, wide release) 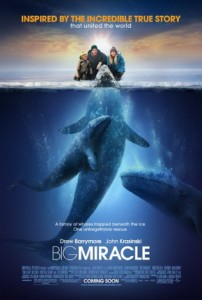 Inspired by the true story that captured the hearts of people across the world, the rescue adventure Big Miracle tells the amazing tale of a small town news reporter (John Krasinski) and an animal-loving volunteer (Drew Barrymore) who are joined by rival world superpowers to save a family of majestic gray whales trapped by rapidly forming ice in the Arctic Circle. (C) Universal (Premieres Feb. 3; wide release)

Keep an eye out for upcoming reviews on the movies you’ve just read about.