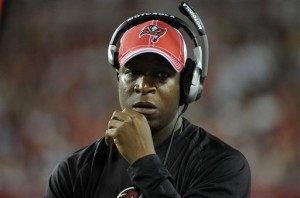 It’s no surprise Tampa Bay Buccaneers Head Coach Raheem Morris has been thrust onto the hot seat with less than four weeks left in a season that has been just plain ugly.

After receiving another lashing from the Jacksonville Jaguars (41-14) on Sunday, most around the Bay begun to ponder the idea of a change at the top for the Bucs.

It needs to happen.

Aside from the overachieving 10-6 bunch that performed well against some of the league’s worst, Morris’ team has sunk deep into the tank with a 17-23 record since he took over in 2009 when former Super Bowl winning coach Jon Gruden was fired.

There’s not much to excuse for the team’s poor performances all season long. You can blame injuries, focus and even the fans (which is a complete joke of a reason) but it all boils down to who is at the helm of this squad: Morris.

If a country fails the people, you don’t blame the senator, you blame the president and you don’t re-elect them.

In this case, you blame the leader of the team, Morris.

He has lost all control of the Bucs and it starts with his style of being the player’s best friend. After kicking defensive tackle Brian Price out of last week’s game against the Panthers, Morris came back out the next day and apologized saying he had lost his cool.

Why would you apologize for an executive decision that YOU as a LEADER made when the time was right?

The answer is simple, he doesn’t want his players to disown him from a friendship point of view.

Now, it’s obvious that Morris may be the most liked coach in the league by his players, or even in Bucs history, but when you break it all down, it’s not enough and it may be too late to get there.

A coach needs to show some personal support, however discipline among the players and fellow coaches needs to be top notch and needs to be consistent. In Morris’ instance, it never has been a balanced scale, it’s leaned to the left.

This is why I am calling for Morris to be fired, not at the end of the season, but immediately along with every other member of his staff from offensive coordinator Greg Olson to the linebackers coach.

It’s time for a clean slate, a new beginning a new “dream”.