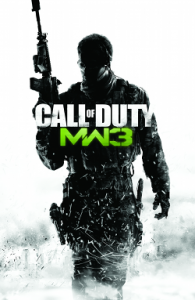 The wait, after much anticipation and speculation, was over. Fans flocked to their local video game store to pick up their copy of Modern Warfare 3, the latest installment in the Call of Duty franchise, which in past games has made Activision absurd amounts of money. Fortunately, all this hype was due.
Upon putting the game in, I jumped right into the campaign. The storyline picks up just a mere plane ride after the cliffhanger of Modern Warfare 2. I was thrown right into a quickly brewing war with explosions taking place all over New York City. The player plays as many different characters on different sides of the conflict, as Task Force 141 chases series villain Makarov across the globe and the Russians launch a full-scale invasion of New York.

The campaign is very exhilarating, delivering a thrilling and movie-like experience. There are constant explosions and I was almost immediately hooked to the story, having known some of the characters from past games.

One very inviting feature is the new Spec Ops mode. It is a combination of both the objective missions, returning from Modern Warfare 2, and the all new survival missions. The objective missions are familiar, and weren’t that enticing in their release in Modern Warfare 2. The survival missions are different. These put two players into unending waves of different enemies. As the players go throughout the increasingly difficult waves, they earn money which can be used for weapons, equipment and kill streaks. This game mode is truly fantastic. After the disappointing Spec Ops in Modern Warfare 2, I expected the same disappointment. But, to my enjoyment, the survival mode was very exciting and fast-paced.

But even with these great game modes, the huge hook of any Call of Duty game is the multiplayer. With over a million people online, I hopped straight into the exciting (yet familiar) game play. I was met with no real surprise; it was exactly what gamers have been getting used to for the past 4 years. You are still a soldier, attempting to kill other soldiers, with other objectives thrown in. Yes, the graphics are somewhat improved, yes, there are some innovative changes, but it is still Call of Duty.

However, that doesn’t mean it isn’t a great time. There’s a reason that it sold an estimated 9.3 million copies in its opening day. Call of Duty is an all-around fun game, and this holds true for Modern Warfare 3.

And all this doesn’t mean it’s even the same game, on the whole. There are plenty of innovative changes. For a huge fan, these changes are obvious and welcomed. For the casual gamer, however, they may have a harder time recognizing these changes, and may not appreciate how the game has actually improved.

The multiplayer is fast paced, in typical Call of Duty style, but just the right amount slower than the ridiculous Modern Warfare 2. This is a godsend. All of the maps are very versatile, and I have yet to come across a gun that has made me throw my controller through a wall.

So here’s the question on many gamers’ minds: is it worth buying?

The answer is yes.

The three companies (Infinity Ward, Sledgehammer Games and Raven Software) joined forces to bring fans a fantastic game. Even the casual fan should be able to thoroughly enjoy the game. Call of Duty is Call of Duty. There’s a reason it is one of the most successful video game franchises, and the developers have once again proven they deserve that accolade. The game has only improved from its predecessors. 9/10