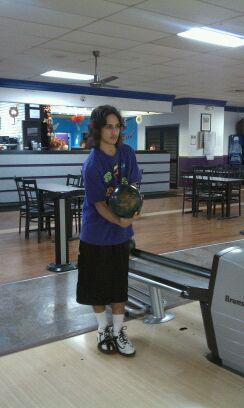 You’d never tell from how they talk, how they walk or how they dress. They don’t brag about accomplishments, and their achievements go unrecognized at the school. Perhaps they like this. There’s nothing special about a bowler; or bowling, for that matter. What more are bowlers than people with good hand-to-eye coordination, successful in a sport that rewards consistency more than flash? Perhaps they enjoy the anonymity that accompanies great bowling. They, unlike many athletes, don’t let it define their lives; it’s just something they do. You may catch them at Royal Lanes or Pinchasers, quietly going about their business. But they, juniors Kyle Hanecki and Zach Kessel, unbeknownst to most, are reaching great bowling heights.

“Have you ever bowled a perfect game?”
Zach: “Yes.” He gives a sly smile.
Kyle: “Yeah. But it wasn’t in league play.” It’s an unverified score, and, by bowling standards, fairly worthless.
Zach laughs. He has the upper hand.

The two don’t know each other well, but they both know that the other bowls. Their dialogue mainly consists of friendly competition, with the occasional remark about the sport itself. Zach sometimes struts his silver ring with a big “300” from the United States Bowling Congress, signifying his perfect game. Other than that, there’s no telling that these two have any remote connection to each other or bowling in general. They wear no bowling shirts to school- we don’t have any sort of club or team- so they slip through the cracks.

“Have you ever converted a 7-10 split?”
Zach shakes his head.
Kyle: “Yes.” He gives Zach a grin that comes with bragging rights.
Kyle has claimed the upper hand.

On the surface, especially when quantifying the game, Zach appears to be most committed of the two. He has eight different bowling balls; Kyle has four. Zach is in three separate leagues; Kyle’s in two. The numbers don’t tell the whole story. “I don’t practice much. I have a life”, says Zach. Kyle acknowledges he doesn’t practice much either. Perhaps it would help to; the surprising difficulty of the game is evident to both of them. Kyle, in partial defense of the game says, “It’s one of the hardest sports ever, just to be consistent. It’s hard.”

“What’s your average hovering around?”
Zach: “About 220.”
Kyle: “Around 200.”
Kyle concedes that Zach has clinched the upper hand. Zach shrugs, then smiles triumphantly.

Kyle was “encouraged” by his father to start bowling, and took to the game quickly. Zach recalls being around bowling ever since he was a tot. They both think of it as a possible career, but still aren’t over-involved. For now, it’s just something that’s fun, something to excel in. From their expressions, it seems that that level of eagerness is commonplace among amateur bowlers. “It’s a bowling thing”, says Kyle. These two are just going with the flow.

“Would you be interested in a bowling club/team at Steinbrenner?”
They look at each other, then simultaneously nod and grin.
The school now has the upper hand.