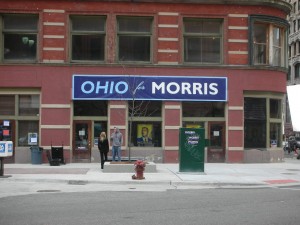 First-century Rome jokes aside; The Ides of March is an interesting movie, to say the least.  However, one must be a cultured adolescent to fully comprehend the film’s complex political plot twits. But if you do follow the story and pay attention, you will find yourself in the midst of a very good movie.

The film is, by definition, a “political thriller”. It follows the story of a governor Mike Morris (George Clooney) and his campaign press secretary Stephen Meyers (Ryan Gosling) fighting for their place in the Ohio presidential primary. Through the course of plot twists and the inevitable backstabbing, Meyers finds himself in the middle of a political fiasco that alters the course of the candidates’ campaigns and following presidencies.

Contrary to my expectations, the film isn’t actually thrilling, at least not in the sense of a film like Silence of the Lambs. It does, however, uphold the standards of “political suspense”, transitioning from a bustling campaign to a dark, complex political scandal. It kept me constantly wondering who to trust and what would happen next. In a technical sense, the film featured superb acting from an all-star cast and phenomenal directing from George Clooney himself, but something is still lacking. With such a great cast as this, you would expect a bit more in terms of depth. For one, Clooney finds himself in a lacking role from the start. Yes, he is the “main character” in the sense that the film is about his campaign, but ultimately revolves around Gosling’s role and transformation. This gives little room for Clooney to work and leaves him as just a plot figure. Unfortunately, the concepts don’t provoke much thought. Yes, we get it: Dirty politics are dirty.

In short, the film finds a way to reveal to the audience what happens in the background of a campaign. It also showcases the effects of various moral decisions that would hold true in day to day life. So, if you feel capable of following such a complex political storyline with pervasive language and a couple sex scenes, I suggest you see it.

One thought on “Ides of March takes a stab at politics”