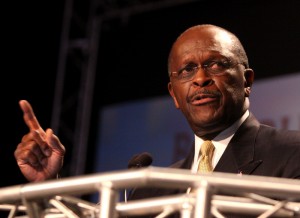 Presidential hopeful Herman Cain stunned press in a perplexing turn of events in a press conference held on Oct. 19. Cain, a persistent “dark horse candidate” in GOP polls, explained what he said was the “real meaning” of the “9-9-9 Plan” his campaign has been touting.
“Listen, people, I don’t know where all this mumbo-jumbo about flat taxes and business taxes came from,” said Cain, addressing hordes of reporters. “The 9-9-9 Plan is about one thing: pizza.”
Cain went on to insist that he’s been trying to tell reporters for at least a month now that he doesn’t give “a warthog’s foot” about taxes of any kind. The reporters in attendance assumed an awestruck silence as Cain revealed what the plan actually entails:
“Nine slices of pizza, for nine dollars. Nine slices, nine dollars.”
The conference room was abuzz; Cain spent a few minutes calming the crowd after presenting his revelation. When asked what the third “9” was for, Cain declined to comment. He did add, however, with a knowing wink, that there was something else in the works.
“I call it the 3-3-3-3-3 Plan,” Cain said. “Three meats, three cheeses, three vegetables, for only three extra dollars.” When asked about what the fifth “3” was for, Cain repeated his previous statement: “Three meats, three cheeses, three vegetables, for only three extra dollars.”
The press conference was adjourned, but in a special, intimate interview with The Oracle, Cain further elaborated on his candidacy plans.
“I call it the 12 Plan,” Cain said, rubbing his hands together and adjusting his glasses. “One pizza, for twelve dollars.”