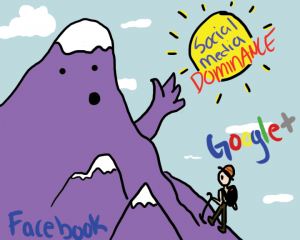 Despite attempts by Google to break into the social media landscape (a horizon dominated by Facebook), the company’s social networking site Google+ has been treated with uncertainty by various tech columnists and bloggers. When the website was in its beta testing phase (where a mostly complete product is opened up to select members of the public to be tested further), there were rumors. These rumors spoke of an exodus away from Facebook to the new and supposedly much more intuitive Google+. That’s generally pronounced “Google Plus,” if you’ve not heard of it.

The service touted such features as “Hangouts,” which are chatrooms for up to ten friends to gab in, and “Circles” which is a privacy feature that “[makes] it easy to put your friends from Saturday night in one circle, your parents in another, and your boss in a circle by himself, just like real life.” However, it seems that students have simply not been taking to it the way they take to Facebook.

According to a report from “data analytics” website Chikita, Google+’s traffic plummeted by more than 60 percent from Sep. 22 to Sep. 27. It was also observed by blogger Michael Degusta that Google’s employees were breaking the so-called “eat your own dog food” rule of social networking by not posting in or using Google+.

The site emerged from beta testing and became open to the public on Sep. 30. Less than two weeks later, a [post]by Google software engineer Steve Yegge appeared on the Internet. In the post Yegge called the service short-sighted and labeled it as a “pathetic afterthought.”

“The problem is that we are trying to predict what people want and deliver it for them,” Yegge wrote.

The leaked post, posted on Google+ by a member of the social network, has received over 10,000 +1’s (the Google+ equivalent of Liking a Facebook page) since it was posted on Oct. 12.