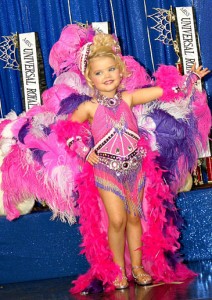 I work at a little girls clothing store and through my shifts I see all kinds of outfits sold.
Sparkly skirts. Low-cut tops. Plain Jane t-shirts. Blue jeans. Unfortunately, more of the former is sold and appears more on children every day.

Shows on TLC like Toddlers and Tiaras seem to be influencing young girls to look and act older than they actually are, whether they participate in pageants or not.

There are many examples and factors that have led to the exploitation of America’s youth: the Abercrombie kids selling Bikini tops with padding, or Sketchers selling their shape-up shoes (meant to tone glutes and thighs) to girls.

There are also the extreme cases. The main winner from Toddlers and Tiaras (Eden Wood) now sings songs – that are available on ITunes – about  “shaking her booty” and putting her “hands up and down, shake it to the ground”. I should probably add that Eden is six and attempting to “shake it to the ground” in the music videos.

Extreme exploitation like this has stirred nationwide chatter about Toddlers and Tiaras, its participants and their family members.

Why a pre-teen or child needs to have cleavage in a bathing suit blows my mind, and girls on Toddlers and tiaras dressing like prostitutes and having fake breast and butt implant majorly repulses and skeeves me out.

Once the competitors are done flaunting their tiny underdeveloped bodies to the word, they have the chance of being awarded Prettiest Smile/Face, Most Photogenic, Most Talented and Queen/Princess or Runner Up from their age group. The participant with the most points wins the Supreme Title.

Many of the girls on the show throw fits, complain and cry all during the process of the beauty pageant. There is also a strong sense of mothers living vicariously through their daughters.

When is this sensational exploitation going to stop? I don’t support children in the pageant industry, because children shouldn’t grow up getting told by parents, judges and competitors that in order to ‘win’ a pageant or in life you have to be beautiful.

3 thoughts on “Dolls or Girls? Toddlers and Tiara’s latest controversy”