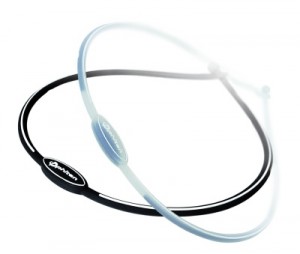 With much hoopla surrounding the World Series and the emphasis on geek-y ways to improve Baseball (a la Moneyball), America’s favorite pastime is often swept up by superstition. It was once believed, perhaps still by Old-Timers, that the farther you could spit the more cut-out you were to play ball.

Pitchers, hoping to—for once in their careers—throw the perfect game, did everything from chewing on pieces of black licorice to exercising at precise times of the day. Baseball has long had a collection of player rituals and unspoken commandments. Now, however, baseball finds itself in a craze over performance-enhancing jewelry.

Players from pitching prodigy, Tim Lincecum, to retired veteran, Randy Johnson, sport these bracelets and necklaces which are infused with Titanium and Gold nano-particles. The company that produces these mystical trinkets is Phiten.

“The core of Phiten technology is in our Aqua Metals,” reads the company’s website.

Well, not exactly the way Phiten intends it.

While no science can actually support the performance-enhancing claims of Phiten’s products, there’s a considerable amount of reasoning behind the “placebo effect” caused by them. The placebo effect is—in a word—a sham. It involves giving a patient or consumer a false version of an actual drug or treatment (or even surgery) in order to create a “perceived or actual improvement in a medical condition.”