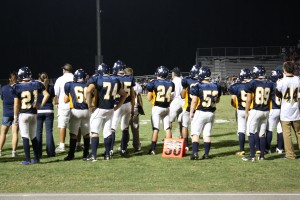 LUTZ – In sports, game seven means history. From the Chicago Cubs giving away an opportunity to finally reach the World Series in 2003, to the Boston Red Sox reversing “The Curse” in 2004, moments have never been more special than in game seven.

On Thursday night, it will be game number seven for both Tampa Bay Tech and Steinbrenner. Both schools, battling toe-to-toe looking for a spot in the playoffs. Maybe, even a district championship in the next few weeks. For the players, this game has been circled on the calendar since the Florida High School Athletic Association (FHSAA) re-districted all of its members in the state earlier this season. Is this the biggest game Class 7A District 7 has seen all season? You better believe it.

The Titans (3-3) have been in a bit of a rebuilding mode this season, after losing longtime coach C.C. Culpepper to Grambling State. However, it’d be hard to tell if you saw them play. The running game has been stellar, with senior halfback Lamarq Caldwell (5’11, 210 lbs) racking up plenty of yardage against defenses. Former Middleton quarterback Aaron Midthus (6’1, 190 lbs), a senior who transferred to Tech before the season, has been hard to solve as well. Midthus is averaging nearly 118 yards per-game through the air. But the Titans defense has been its stronghold this season. Junior defensive lineman Kadesh Reaves (5’11, 288 lbs) is a run stopper, plain and simple. Reaves’ size and strength along with his leadership skills gave head coach Jayson Roberts the decision to attach a “C” to his position, naming him team captain. Along with Reaves, Tech lines up 33 other players six feet and taller, making their size something to fear for unsuspecting opponents.

The Warriors (4-2) have shown in their two plus years of existence, a form of maturity that starts at Head Coach Floyd Graham and trickles down the roster. After finishing .500 in their first full varsity season last year, Steinbrenner set the mark at nothing less than district championship along with a playoff appearance for 2011. So far, the Warriors are close to meeting the expectation of a spot in the postseason, while the district remains just outside their grasp. After opening the season with a 10-0 shutout loss to Sickles, the team didn’t back down. Instead, they pushed forward. With sophomore halfback/wide receiver Jake Carroll (who will miss the remainder of the season, after tearing his ACL in week 5) punishing defenders and junior halfback Kendall Pearcey breaking out for long runs and touchdowns, the Warriors quickly became a team to beat. But when opportunity knocked on their door to control the district and keep their first place slot, Steinbrenner laid an egg…big time. Nine turnovers, an injury to their number one running back and too many penalties to count later, the scoreboard read 37-7 in favor of Gaither.

But the maturity helped the Warriors pick the pieces off the ground as they traveled to Riverview. Sophomore quarterback Curtis Fitch had a career night with three touchdown passes in the first half alone, Pearcey accumulated three total touchdowns and the defense turned their previous weeks nightmare into a dream. While the Warriors have struggled with its passing game this season, the running game proved it was alive and well even in Carroll’s absence. With Tech’s size and speed on defense, that winning confidence could be crucial if they are to make a push for the postseason.

With both the Titans and the Warriors coming off big wins over their respective opponents in week six, confidence won’t come into question. What will however, is the “big game” factor. The Warriors have already played a big district opponent and they know what it’s like to have their face rubbed in the mud this year and Tech hasn’t. But something Tech has that Steinbrenner doesn’t, is past games against big state opponents. Both Plant and Armwood pushed over the Titans, both combining to win 76-7.

So who has the upper hand? Is it Steinbrenner, with a newfound consistent passing game last week against Riverview and a constant, confident dose of rushing which wears down opposing defenses? Or is it Tech, with a county all-star quarterback and a team stacked with NCAA prospects? We can’t answer that until Thursday night, when the toe hits leather.

Game sevens have always produced some of the greatest moments in sports history. In game number seven of the 2011 season, the hunger for victory, bragging rights and control for a playoff spot in what could be the biggest district game of the season will only further push that proven notion. Who will come out on top? That’s for fate to decide in this clash of the titans.

2 thoughts on “It all comes down to this”