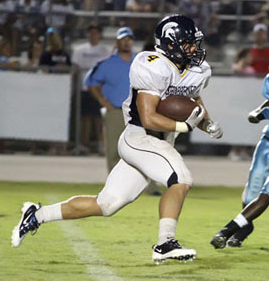 In a week that has gone from good to bad, has now gone ugly. On the opening kickoff of last Thursday’s district match-up at Gaither, running back/wide receiver Jake Carroll went down with an apparent knee injury. The team’s worst fears were confirmed Friday when the diagnosis was a torn ACL, Carroll will miss the remainder of the season and possibly some spring practices.

It will be up to junior Kendall Pearcey and Nick Green to pick up the slack left behind from Carroll’s injury. The two were dominated by the Gaither defense, with the lone bright spot coming from senior Zack Jones, who had been nursing a sore ankle after an injury in practice, when he rammed his way into the endzone for the lone Warriors score of the evening.

The injury bug hit the team in 2010, when at one point the team was trying to heal 13 players from early season injuries. However, some good came from the injury detour as Carroll was called up to varsity from junior varsity as a replacement kick returner.

7 thoughts on “News gets worse for football, running back Carroll out for season”