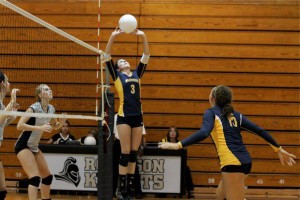 When the most successful class of players in the two year team history exited the court after a loss in the regional semifinals against Braden River, many wondered if the girls varsity volleyball team would be able to contend for another district title. Then when head coach Staci Elias announced she was stepping down from her position soon after, the doubts grew even heartier in the minds of some volleyball faithful, but the team knew the proponents for a good year were still there.

After Elias’ resignation, Athletic Director Eddie Henderson quickly named then-assistant coach Jennifer Graham her replacement. Graham, a graduate a former volleyball player for Central Michigan University, had been working as head of the girls flag football team when the decision was made to give her the lead role in guiding the team. Junior Madison Seuzeneau says while the transition from Elias to Graham was a little difficult at first, the team has rallied around her and has worked hard to succeed under Graham and there is a committed effort to get better every day. “I feel like everyone has high respect for her and we are doing well with her coaching,” said Seuzeneau.

Prior to the start of the 2011 season, the roster was cleared of big names like Erin McMurtry, Natalia Ortiz, Nikki Dohermann and Katie Dickerson all of whom graduated for new faces like sophomore Madison Powell (sister of senior team captain Miranda Powell), freshman Lauren Heldt and freshman Avery Bradshaw. Seuzeneau sees a big boost in team chemistry due to offseason conditioning and the club teams some girls compete on outside of school. “They’ve played for pretty good club teams, also they have come to conditioning and have learned the speed of our level of play and they’ve adapted pretty well,” said Seuzeneau.

Moving into a new district for 2011, meant changes for all school athletic teams, but for volleyball the shift from 4A-9 to 7A-7 was easier because of the lack of true competition from new opponents Chamberlain, Freedom, Gaither and Wiregrass Ranch. Only Freedom reached the postseason in 2010 and the only other team to clinch a winning record was Wiregrass which finished 11-10. Seuzeneau believes while the opponents may be weaker than in the previous two years, the preparation and game plans will not change. “Last year, our opponents weren’t very strong in districts,” said Seuzeneau. “This year it’ll be a lot harder, games will probably go a lot longer but we’re prepared for anything and hopefully we will be State finalists.”

The team began the season up against the toughest opponent in the state and the 17th ranked team in the nation by CBS’s MaxPreps: Plant. The five-time defending state champions entered Warriors Coliseum with a rebuilt team and new coach, but the most difficult task was yet to come against the ladies. After a rough start in the first set, the team battled hard with the Panthers taking two sets in a row, looking for what would be the biggest win in school history. But in the end, the experience and stamina of the Panthers was too much for the ladies to handle and they dropped the final two sets. Seuzeneau believes the heartbreaking loss to Plant made them want to be better and it will catapult their success down the road. “We hope to take a State title eventually, maybe probably this year and just keeping winning districts every year and keep getting further,” said Seuzeneau.

The ladies will compete against non-district opponents Wharton and Durant before traveling north for the Fivay Tournament at Fivay High School in Pasco County before playing both Chamberlain and Gaither then ending the regular season in the annual OVA Dig Pink Tournament for Breast Cancer Awareness.