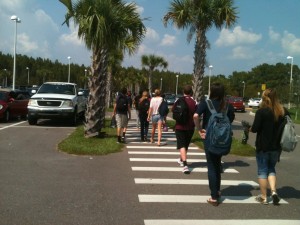 When a teenager turns 16, it’s an exciting time. Some people get their license and the lucky ones get a car. Most licensed drivers enjoy the freedom they have transporting themselves to school, sports, work and other activities.
At the assembly last week, administration announced that no sophomores would be allowed to drive, unlike last year, and that administration will put licensed juniors drivers into a lottery system to get the spots left over that seniors don’t take up.
“I don’t like it, I don’t think it’s fair to people who play sports and stay after school,” said Junior Madison Keller. Keller is on the track team and involved in other after school activities and said that she will be mad if she doesn’t get a pass because she won’t have transportation to school and cannot take the bus home during track season.
Students whose parents who work, or don’t allow their children to ride with other kids, are completely out of luck and don’t have busses to their neighborhood.
It’s completely obvious that seniors should be the first to get parking passes with juniors following, but many students will still be denied a parking spot.
“We at Steinbrenner High School wish that every student have the opportunity to drive, however, we don’t have enough spaces,” said Assistant Principal of Student Affairs Ben Gerhardt.
But out of the senior class (holding 422), 275 people have parking passes and the parking lot only holds approximately 400 vehicles. There’s only going to be a small percentage of juniors who get parking passes and the rest who cannot drive because of the schools space issue are going to end up feeling high and dry.
“Who thought it was a good idea to have a school with a 2,400 capacity and not even have room so one-fourth of the students can drive?” asked senior Meagan Mahaffey.
The schools population now is 2183 with an estimated capacity of 2400 next year. When the 580 current juniors become seniors, how are all of us supposed to fit in a parking lot?
The main problem with this “parking issue” is space. Everything in this school is too small. However, in order to deal with the small parking lot, upperclassman who play sports, are in clubs, are choiced in, don’t have a bus or work should get priority over people who live close to school and don’t do any of the activities listed above.
To the students without a parking pass, Gerhardt suggests that there parent drive them, to ride bikes or to carpool.