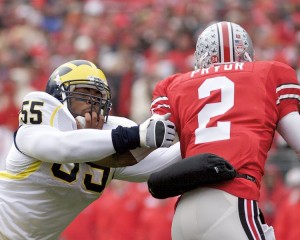 With the most recent scandal occurring of a collegiate athlete illegally receiving monetary benefits, again the question is raised as to whether the athletes themselves should get a paycheck for their work. On August 30 the National Collegiate Athletic Association (NCAA) decided to suspend 8 football players at the University of Miami; some receiving improper benefits as little as $150 and some getting nearly $800. Student athletes put in nearly the same work in practice and in the games, but still aren’t able to make any monetary gain while the professionals are making millions.

Earlier this year, 5 Ohio State University football players were suspended for multiple games for selling autographed merchandise to fans and 2006 the Heisman Trophy-winning, University Of Southern California running back Reggie Bush was forced to relinquish his award. It’s a continuing trend; and it’s common knowledge that many continue to accept the money. Auburn University quarterback Cam Newton, who was taken first overall in this past NFL draft by the Carolina Panthers, was under investigation last year from the NCAA for the exact same reason as Bush.

Often times the money comes from boosters of the university, as was the case at Miami. Other times it comes from the agents. Last year former sports agent Josh Luchs detailed in an article for Sports Illustrated how he paid many former and current athletes (when they were in college) for the hope to become their agent.
Collegiate athletes generate billions of dollars for their schools and communities- whether it’s revenue generated through game tickets, merchandise, or even video games, and can’t take a penny from the profit. The NCAA has become a legitimate business but the athletes have become modern-day slaves (as parodied in the satirical show South Park). Naturally, many are given scholarships and don’t have to pay for any academics, but it goes to relatively little use when most athletes are leaving without a degree.

Since the business is constantly evolving, the term “student-athlete” is used more sparingly than ever. The athletes spend much more time playing and practicing and travelling for the sake of their respective sports than they do for their education. They’ve become pure athletes that count down the days until they get drafted.

If the NCAA refuses to change the rules, there will be no change in the college sports world. There will continuously be investigations that result in removal of awards and tarnishing of the legacy of university programs. It’s time for them step up and recognize that athletes deserve some of the share in the ever-growing college sports world.

6 thoughts on “Time for Collegiate Athletes to Get Paid”