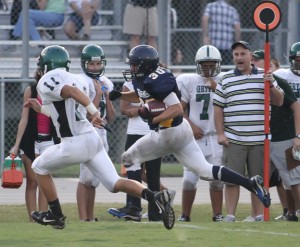 In the most anticipated game since the 2009 inaugural season opener against Strawberry Crest, an estimated record crowd of 3,000 at Steinbrenner Memorial Coliseum saw the Sickles Gryphons defeat the Steinbrenner Warriors 10-0.

Sickles (1-0) used their ground attack led by senior running back LaDondra Crittenden against a tight Warrior defense driving the ball from deep in their own territory to mid-field on their first possession. Crittenden then found a hole with good blocking from the Sickles offensive line and was off to the races for a 55 yard touchdown run giving the Gryphons a 7-0 first quarter lead.

In the second quarter, Sickles senior placekicker Andres Vasquez used his abilities to the fullest against the Warriors (0-1), pinning them back near their own end zone. They would make strides on the drive though, as sophomore quarterback Curtis Fitch led the Warriors all the way to the red zone before three rushing attempts were stopped by Sickles seniors Adrian Lopez and Trey White. Steinbrenner would bring out junior kicker Jessica Weatherman to attempt a field goal, but the ball sailed wide and the Gryphons took their lead into halftime.

The Warriors received the ball to begin the second half, but failed to capitalize on the opportunity and opted for a Chandler Phillips punt to give Sickles back the ball. The Gryphons would do their best to consume as much clock as possible, running the ball right down the middle. However, after about an eight minute drive, Vasquez pinned the Warriors deep again after a long punt down to the one yard line which would lead to another three and out for Steinbrenner.

Midway through the fourth quarter, Sickles drove the ball just outside the 30 yard line and were stuffed by a host of Warrior defenders. Vasquez would send a 33-yard field goal through the left upright giving Sickles a 10-0 lead.

Trailing with just over four minutes to play, the Warriors finally began moving the ball down field. Fitch hooked up with sophomore running back Jake Carroll for a long reception giving the Warriors their longest gain of the night. But with time winding down, Fitch was picked off by junior defensive back Jakarius Crittenden and the Gryphons would hold off the Warriors for the shutout and the win.