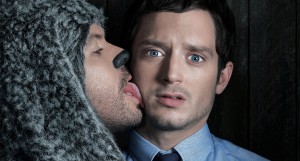 Dark matters that dive into personal feelings aren’t typically in sitcoms. Lighter, feel-good comedy is much more commonly seen on TV these days. FX’s latest creation, “Wilfred”, crosses over this invisible boundary. The show, which was adapted from an Australian comedy that bears the same name, is a philosophical take on, essentially, how to live life. The sporadic jokes here and there merely add to the intriguing philosophy of Wilfred (Jason Gann), the dog who has the power to manipulate, deceive and, most importantly, teach.

Meet Ryan (Elijah Wood), the timid ex-lawyer who doesn’t see a purpose in living anymore. In fact, the pilot kicks off with him attempting suicide; of course, he doesn’t succeed. The morning after his failed overdose, he meets his sweet, pretty neighbor Jenna (Fiona Gubelmann) and her dog Wilfred. The world sees Wilfred as an adorable pooch, but for whatever reason, Ryan only sees a scruffy Australian man in a cheap dog costume. Within minutes of their introduction, Jenna is gone and Wilfred is on Ryan’s couch, smoking while trying to convince Ryan to skip the first day of his new job that his controlling sister Kristen (Dorian Brown) has found for him.

It’s pretty obvious already that “Wilfred” is unique, to say the least. Wood and Gubelmann are both decent as far as acting goes, but Gann truly steals the show. He somehow manages to act as both a dog and a human at once. His character displays classic dog behaviors (for example, in one episode, he tries to attack the vacuum while Ryan is cleaning up the house) and characteristics, such as loyalty to his owner and a deep attachment to the people he loves. At various points throughout the show, it seems like Wilfred is trying to sabotage Ryan; but the fact remains that despite all his wisdom, Wilfred is a dog and doesn’t know any better. Gann’s splendid acting ensures that this point gets across to the viewer.

The deep issues that are splashed throughout each episode are something else, though. Few shows dare to explore such risky topics, but “Wilfred” wrangles these matters head-on. Wilfred’s ability to prod Ryan with all the right questions brings various problems to light. For example, at one point Wilfred says to Ryan, “Aren’t you tired of doing what everyone else wants you to do? Maybe it’s time you quit playing ball with them and just play ball with me.” Wilfred is impulsive, upfront and manipulative, but these traits are what make him such a creative, interesting character. Ryan represents the neurotic insanity that plagues so many people today, and Wilfred shows Ryan that worrying all the time is an absurd way to live. The balance between their personalities makes this show into a bizarre masterpiece.

The most important thing to understand about this show, simply put, is that it’s very weird. A dog that smokes and appears as a man with an odd choice of wardrobe can seem ridiculous. Once you get over that fact, “Wilfred” has a certain appeal that makes it unique from almost every other TV show out there. The humor can be lacking, but the values emphasized in the show apply not only to Ryan, but to the viewer as well. For the rest of the season, I will be reviewing each new episode, so tune in to FX every Thursday at 10 pm and then check this paper’s site for a review. Over the next few episodes, we may even see Ryan may shape into the man every guy aspires to be (under Wilfred’s careful direction, of course).