Blessed are the meek, for they shall inherit the earth. Nowadays, this saying rings true more than ever. In the past few years, a cultural subset has gone from being almost complete outcasts to one of the major focuses of modern pop-culture. The group I am talking about is none other than the nerds.
For the past several decades, nerds have been social pariahs. Though intelligent, they were rarely accepted by their peers, due to a perceived lack of social skills and for their obscure, niche interests. In pop culture, nerds are commonly characterized as the kids who sit by themselves, have their lunch money stolen, and spend their free time getting shoved into lockers. Not even the dictionary was on their side:
Nerd: noun; a person who behaves awkwardly around other people, usually has unstylish clothes, and is obsessed with a non-social hobby or pursuit.
As many who grew up in the public school system can attest, merely showing an interest in academics could be enough to get you labeled as a nerd, and ostracized. But as upsetting as it was that popular society had turned being intelligent into almost an insult of sorts, a new generation of nerds has since risen out of the fire– one that is not only accepted, but encouraged. Things that would’ve been written off as “nerdy” and uncool only a few years ago are now more popular than ever among today’s youth.
For instance, trivia crack has recently been added to a long list of mobile app addictions. The game in and of itself is quite simple– a basic questionnaire with a spinner involved. However the key here is that in order to progress through the game, players have to answer questions about science, history, entertainment, art, sports, and geography. Excluding the sports and entertainment categories, this game is for nerds in every sense of the word, except for one major part—that it’s actually popular. Popularity and nerds are supposed to go together like cats and dogs. Or in other words, not at all. Based on this seeming contradiction, maybe it’s time to re-examine what exactly a nerd is.
Glasses, check. Watch, check. Braces, check. Tie, check. Suspenders– a must. These key features have defined nerds for generations, and yet now dressing like this has become almost commonplace. More significant than their acceptance in fashion would be their newfound place in pop culture. The Big Bang Theory is a popular TV show on CBS that is currently on its 8th season. This is a feat for any TV show, but even more significant is that its subject matter and punch lines all deal with comic books, movies, videogames, and the occasional Dungeons and Dragons reference. This fact begs the question– if nerds are supposed to be non-social, then how does a sitcom about this group have such popular appeal while still managing to maintain a social aspect?
Despite all these factors, the most recognizable social trend that shows a redefinition of the word nerd has taken place in the theatre. Over the past few years, movies involving superheroes have become huge blockbusters and continually draw in colossal crowds at the box office. Movies like The Avengers II and Star Wars VII are highly anticipated, not just by “nerds,” but by everybody. Their popularity and success has drawn widespread focus on the comic book universe that was barely noticed before.
Nerds can come in many shapes and sizes, and no two share the same interests. Despite this, almost all of them had to worry about being made fun of for their interests and hobbies over the past few decades. It’s only now that they no longer have to hide in the shadows, and are now able to display their interests with pride. The nerds have finally risen. 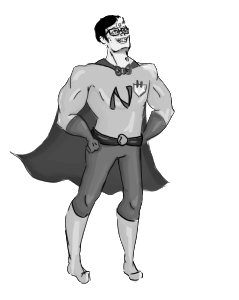