Senior Claire Becker has had a love of golf since she was 8 years old, a passion stemming from her father. This passion has taken her on a great journey, which will continue next year at Daytona State College, where she plans to go for college.

“I’m so excited,” said Becker, “The coach is fantastic and the practice facility is state of the art.” She went on her official visit in September and met the whole team.

“The team chemistry is wonderful,” said Becker. “You can tell they’re all really good friends.”

Daytona State College has won the national championship seven times, which Becker hopes to be apart of. She thinks she can make an impact on the team and help take them where they want to go.

“I hope to become a much better player and develop skills through head coach, Coach Brown,” said Becker, “She is such a great coach who really cares a lot about her players as people, not just the scores they can shoot. I think it would be amazing to learn from her, since she’s already accomplished so many things I’d like to do.”

Becker will continue to train for her collegiate golf career.

One of the main leaders of the varsity volleyball team, senior Lauren Heldt has decided to take her athletics to the next level at the Air Force Academy, where she plans to continue playing volleyball.

“It is a real honor to be accepted into the Air Force Academy,” said Heldt. “There are so many opportunities that are at my grasp at this academy and I hope I can thrive on these opportunities with volleyball while at the same time excelling academically.”

Heldt has been playing volleyball since fifth grade and has enjoyed it ever since. Heldt has made both the middle school team and varsity all four years of high school and has evolved into a leader over the years.

“The people who have influenced me to play volleyball were probably my parents,” mentioned Heldt. “My mother had played volleyball in college and I want to do the same and keep improving on my game.”

Heldt’s acceptance into the Air Force is not her main priority. Her main goal, at the moment, is to win a state title in her last year at Steinbrenner and leave high school on a high note academically.

Senior Chase Debonis has been in involved in baseball all his life since he was three years old and found inspiration to start getting involved with the sports.

As Chase got older, he branched out to many different sports including football, basketball, and soccer but realized he had a natural love for baseball.

“My older brothers played it so it was just a family thing,” said Debonis. He played on a club team called Score International, a Christian based baseball camp ,with a bigger objective then baseball.

Debonis received two offers from colleges, but his offer from Bethune- Cookman University was out of the blue. But after taking a closer look, he determined that he was going to commit to Bethune-Cookman University when he went on an official tour during the past summer and was able to meet all of the coaches and a member of the team.

“The coaches are great. They are nice, laid back so it isn’t going to be stressful job. And the player I met was extremely nice and helpful,” said Debonis.

Debonis hopes that with plenty of hard work and dedication, he can get a starting position on their baseball team. After meeting all the coaches, a player, and seeing the fields and finally making a commitment, he knows it’s the place he belongs. 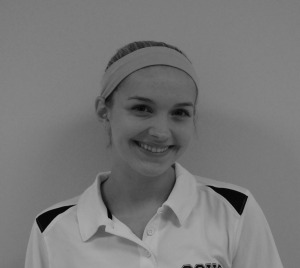 Senior Avery Bradshaw tried every sport imaginable before falling in love with volleyball at age 11. A family passion she can remember, volleyball now takes Bradshaw to the next level, as a college athlete. Bradshaw has signed with Saint Leo University.

“I chose Saint Leo because the coaches are great, as well as the team,” said Bradshaw, “It’s also 40 minutes away, and I’m really close with my family so I’d love for them to come see me play whenever they get the chance.”

She also talked about how well she clicked with the team. Maddy Powell, a senior last year, who played on the volleyball team at Steinbrenner, also attends Saint Leo and plays for their team.

Bradshaw also played for Tampa United, a club volleyball team where she worked with the coaches at Saint Leo University.

“Personally, my goal is to be a starter my freshman year,” said Bradshaw, “I also want to increase my vertical. I would love to be an All-American at Saint Leo; that would be my ultimate goal. Honestly, I’d just like to take the team farther then they’ve ever been before.”