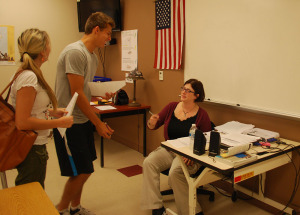 For the majority of high school students, the college application process begins in the fall of their senior year. In today’s competitive job market, college is essential. The stress to get into big-name ivy league schools and universities is more intense than ever, but as the years go on, more and more kids are turning to community colleges instead. Though as many as 43% of students are now enrolling in community colleges, according to the Higher Education Research and Development Institute, telling someone you’re going to a community college continues to be met by smirks or barely-concealed pity.

Despite its unwarranted reputation, going to a community college holds many advantages. A major plus of attending a community college is how much money you save. For instance, at Hillsborough Community College (HCC) you pay tuition based on your credit hours, with every hour running at $104.34. For full time students, the estimated cost is only about $3,000 a year for in-state students. For students attending a large university like Florida, the yearly in-state tuition is roughly $6,270. But when students have to add on the cost of books, housing, food plans, and transportation at a university, the price jumps even higher.  All together, an in-state undergrad can expect his average expense to be around $20,220. Because of this, attending a four year college forces a lot of people begin their adult lives already in-debt.

Another major difference between community colleges and universities is the environment and lifestyle. At a university, students can regularly attend thrilling football games and are given opportunities to pledge with a wide range of a sororities or fraternities. Students of any major are provided with countless ways to be a part of the student body, show their school spirit, get involved with different interest groups, and connect with others that have similar likings. They meet new people and make new friends. College is their new home, and they have to live independently and take care of themselves. For these students, this is the beginning of entering the real world and fending for themselves. Doing their own laundry and cooking their own meals alone can be more responsibility than any of these kids ever had before. With no parents nagging in their ear and telling them what to do, for the first time students are truly making of their own choices living away from home, though many still depend on mom and dad for money here and there.

At a community college, there aren’t as many sports teams, and none are as widely supported as in universities. For example, HCC only offers volleyball, men’s and women’s basketball, baseball and softball, and tennis. There aren’t any sororities or fraternities, school functions don’t really exist, and the student body has a critical lack of school spirit. This is due to the nature of community colleges, they aren’t nearly as self-contained as universities are, where everyone lives and in some cases even work on campus. Because many students continue living in the same town they grew up in, they can  still maintain their old lives and friends. Students attending distant universities show up and are lucky to know even a handful of people there.

Community college is a lot more flexible and ideal for starting quickly in the real world. The university experience is a once in a lifetime chance, and these degrees continue to hold more weight on resumes. Money plays a big part of where students can attend collge, but there are scholarships available for those determined to attend a university. Still, community colleges are becoming a more and more viable option in today’s world.