As a very devout Yeah Yeah Yeahs fan, Crush Songs is an awaited release for me; I’ve longed for a totally acoustic album, Show Your Bones coming close but not the straight folk vibe I craved. Karen O.’s debut solo delivers a sketchbook in this vein, its entire length under a half hour, in what has been called a “soundtrack” for “love crusades” by the creator herself.

Crush Songs is different from every album I’ve heard this year because it is simply demos; fifteen tracks, with only three of them passing the two minute mark. These sketches of songs were apparently recorded from 2006 to 2010 after Yeah Yeah Yeahs’ sophomore album, Show Your Bones, was put out. Only basic instruments, mainly acoutsic guitar with hints of drums and on the final track two other singers. What led to the creation of this private album was a period for Karen O. where she “crushed a lot” and thought she’d “never love again”. As such, the theme is frankly apparent on the tracks. 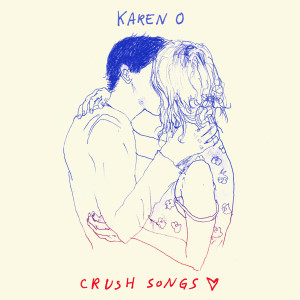 The three opening tracks are perfect examples of the entire album because they are short, contained doses of infectious lovelorn and inspired intervals. Like a crush, they are short, sweet, but can linger. I’ve had “Oooo” and “Rapt” stuck in my head. Although childishness persuades throughout the album, Karen O.’s signature approach appears, albeit subdued. Compare a song like “Day Go By”, a soothing lullaby almost, to Yeah Yeah Yeahs’ hit single “Maps”: the same voice persists, the difference is the backing. In the former, it’s simple acoustic guitar, while the latter has drums and guitar, the fuzzed out feedback induced sort that I feel in love with when I first started listening to them.

What is most enjoyable about the tracks here is their emotion, those tiny capsules captured to tape almost perfectly. It doesn’t come across in all the tracks, where a song like “Beast” or “Comes The Night” are just clunky and dull, but juxtaposed to “NYC Baby” or “King”. “King” is a very interesting homage to the passing of Michael Jackson, with silly beautiful lines like “He’s in his castle in the sky” and “Is he walking on the moon?”

As a fan of the Yeah Yeah Yeahs, I’ve been dying to have just a purely acoustic album. Last year’s flat fare, Mosquito, was far from it, being a lackluster and pain to listen to (although it gains some merit because it has two of the best Yeah Yeah Yeahs songs ever, “Despair” and “Wedding Song”), and it may be argued this solo album was released to serve as a recovery. Hopefully, it’s one step closer to the band having a pure acoustic album.

Whatever the case, this album is a very good listen, full of crushes sung in lullabies for a hipster. 8/10