It’s no wonder we haven’t heard much from the Colombian She Wolf lately–she’s plenty busy with her newborn baby–but despite the four years that have gone by since her last album, Shakira returns with a bang.

Her self-titled LP, released March 25th, doesn’t just feature her usual blend of Latin pop; Shakira strays into uncharted waters with “Medicine”, which adopts a country vibe, and even the first track off this album, “Dare (La La La)”, which is also the theme song to the World Cup held this summer in Brazil (it’s no “Waka Waka”, but it’ll do). It’s evident that Shakira is trying to keep up with the times, and we hear this on her opener: an electro-funk dance track that goes surprisingly well with her voice. She worked with artists such as LMFAO and Skrillex on this LP, and even though it’s hard to picture Shakira in the same room with either of them, we hear traces of their influence in her music. 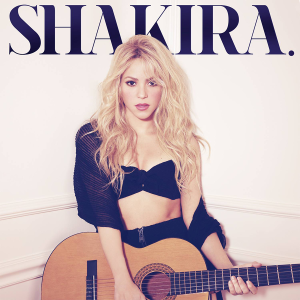 The album’s second track, “Can’t Remember To Forget You” has us wondering why the Shakira/Rihanna combo hasn’t happened before; though it was a single released prior to the album, it will still sound fresh for quite a while. Likewise, “Cut Me Deep” (featuring Magic) and “Empire” are chart-toppers, though for two totally different reasons. While “Cut Me Deep” gives off happy-go-lucky Caribbean energy, “Empire” is a powerful, poetic ballad that rings around in our heads for days. “Spotlight”, however, is a little too Avril Lavigne and consequently outdated rock-pop, but let’s remember this is Shakira we’re talking about.

When we reach “Medicine”, things get a little bizarre. Featuring Blake Shelton, the song is decent, but it’s uncomfortable how much Shakira sounds like Carrie Underwood rather than herself. No, this isn’t the She Wolf we know, and this song isn’t much in terms of originality.

The album does appeal to a wide variety of audiences: electronic, pop-rock, country, smooth reggae-pop; and as always, the undercurrent of her Arabic heritage is there. But Shakira’s slower tracks aren’t too impressive, unless we’re talking about “Broken Record” or “Loca Por Ti”. The lack of energy in this album is a bit disappointing, and my only complaint about it is that there are too many tracks like “23” and not enough like “Empire”. By now, Shakira should know that we don’t come to her for the slow songs about love and breakup–we have Taylor Swift for that. From her we expect the good, timeless dancey stuff that’ll stay stuck in our heads.

But who knows? Maybe she’s trying to slow things down to knock some lullabies out of the way.

Regardless of this LP’s reactions, Shakira continues to rule as one of the biggest influences in Latin-American entertainment. And though this album brings out a different side of her, she still has my vote. Score: 7.5/10.