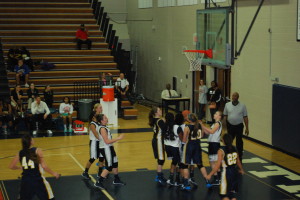 On Friday, the girls basketball game was a blowout at Gaither, Steinbrenner outscoring the Cowboys 47-9.

Rachel Briere scored 11 of the teams points, with Olivia Unger in tow scoring 8. The team gradually built up a lead, scoring 10 in the first quarter to Gaither’s 3. By the time the game reached the last quarter the score was 37-6 giving Gaither little hope of victory.

Coach JR Allen added another win to the list, and was glad the team didn’t go in too confident because of its first victory over Gaither.

“When you run into a team a second time especially if it was a win young people tend to want to relax a little and they get a little sloppy, but our defense was really good as usual…can’t be upset it’s another win.” Said Allen.

The Boys team also added a victory to their repertoire Friday, but in much closer fashion, winning 87-79.

Although the team won, for the first and second quarter it was especially close game. Steinbrenner led, but only scored 12 points in the second quarter, allowing Gaither to push ahead with 22, leaving for a halftime score of 31 -34.

The Warriors made up for it in the second half making 36 baskets while Gaither only made less than half that, 17. Steinbrenner held off a 28 point fourth quarter from Gaither to seal the deal.

The driving force behind the Warriors was team captain Keshawn Ingram who scored 34 points, along with Jamal Byrnes’ 19, and Jack Frank’s 14.