When Hillsborough County made the switch from Edline (now Blackboard Engage) to Edsby, some members of the Steinbrenner faculty expressed doubt regarding Edsby’s ability as an education and student management platform. Shortly after the beginning of the 2013-2014 school year, teachers were given access to Edsby and summarily began to explore the new system. Unfortunately, these first impressions didn’t measure up to their expectations and left them with a bad taste in their mouths.

Edsby is developed by CoreFour Inc and is marketed as the “world’s best education engagement platform.” As far as I can tell, Edsby tries to be what its competitors aren’t: An unintuitive education management software suite with a cringe-inducing Facebook-esque facade, complete with news feed comments. That’s right! Now you and your friends can flood the front page of my student information hub with snide remarks about how unfair last night’s assignment was. All evidence points to Edsby developers putting too much effort into the social media aspect of the software instead of the calendar and grading system. Attention to current flaws in the system should take priority.

For many teachers, Edsby simply feels like an uninspiring product. Features that Edline provided, such as a class website and online assessments, are seemingly absent in Edsby. AP US History teacher Jennifer Ordetx said she “had to resort to using a different web page” to present material to her students. Unsurprisingly, Edsby does not provide the ability for teachers to customize and manage their own class website. For that, Ordetx uses Google sites, a free personal website solution for those looking to create a website with just a few clicks. 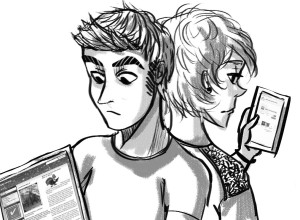 AP Economics and American Government teacher Tyler Orr feels that Edsby doesn’t adequately meet his needs as a teacher. “Really the only way I use Edsby is for grade and record keeping. As far as the communication aspect of Edsby goes, I tend to ask students, teachers, and parents to use the school email address rather than with Edsby because I won’t necessarily see an Edsby message, and I can’t always respond to it right away, but with email it’s guaranteed to go to my phone and I can respond to it immediately from my phone without any problems.” said Orr. “I prefer the regular email address to Edsby communication.”

Edsby isn’t in its infancy. It began as CoreFour’s flagship product in 2010 and has gone through several iterations since then. One would assume that by now, a product three years in the making that is being marketed to a large urban school district such as Hillsborough County would be relatively bug free. However, all bets are off when it comes to the “world’s best education engagement platform.” Edsby feels a lot like an incomplete product and has a number of unresolved bugs and design flaws that further frustrate teacher and student usage of the software. “The system itself is problematic,” said Orr. “It’s not elegant; it doesn’t flow very well; it’s not the most user friendly interface. I lose every grade I have in the book.” In the future Orr would like to see a push notification system integrated with Edsby. As of now, teachers can’t receive notifications via email or by phone and must log in directly in order to view them.

Change is nice. It’s especially nice to see the school board attempt to improve the quality of my day-to-day online interactions with my classes and teachers. However, Edsby, in its current state, is in no position to replace Edline. An unfinished product, it lacks key features that were present in Edline and instead hopes to appeal to our social media driven world with a somewhat uninspiring Facebook ripoff scotch taped to the top of it all and praised as the cherry on top–the feature that defines Edsby. CoreFour should do all its clients a favor and go back to the drawing board to figure out its priorities. Here’s a little bit of advice for them: Cater to the people actually using the software. Let the teachers and faculty beta test instead of what I would assume to be happy-go-lucky 12 year olds with a strange obsession with Facebook and a backwards sense of what a user interface should be like. Edsby has potential, but without a serious design overhaul, it will be forever doomed to disappoint.