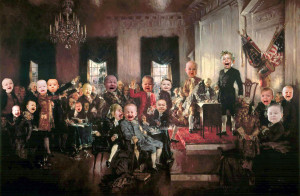 Tensions are brewing at Capitol Hill as republicans and democrats remain divided over how to resolve the temporary government shutdown that began after the two parties failed yet again to decide on anything. Republicans are now up in arms in a last ditch effort to stop the passage of a new bid to lengthen congressional nap time. “Should this bill pass,” argued Rep. Paul Cook, “the democrats would have more of an opportunity to give my fellow republicans and I mega wedgies while we’re having nappy time!” An anonymous source was able to confirm that at least six members of a bipartisan committee to stop wedgies were given wedgies during nap time.

Congressional nap time was first proposed by Rep. L. Z. Susan in March of this year. News of the proposal came shortly after Mississippi ratified the 13th amendment, thereby ending the century and a half period in Mississippi’s history where the status of slavery was legally questionable. The bill was initially designed to allow congress additional time to exercise uselessness. However, the debate rages on in both houses over whether the bill in and of itself is a useless measure.

“I can’t quite understand how lengthening congressional nap time will have any discernible effect on the counter productivity of congress,” stated Pulitzer prize winning political commentator Anthony Emilio Sergio Suárez III. “As a political commentator, my job is to make petty jabs and talk condescendingly about people I don’t like. The longer congress remains in gridlock, the better for me and my unfulfilling dead-end career.”

Despite angsty furloughed government employees, a tumbling economy, and a clogged toilet in the Capitol building’s southwest wing, the majority of representatives believe that resolving the so-called “Nappy Time Bill” is of primary concern. “When it comes down it, issues such as the national budget, world hunger, and life on Mars are for dummy heads,” said Speaker of the House John Boehner as he and several other congressman fashioned macaroni necklaces from wasted taxpayer dollars.

Tensions reached their height mid afternoon after representatives from Massachusetts and New York were unable to agree on the proper pronunciation of ‘water’. The House is suspending it’s activities indefinitely until Rep. Timothy Bishop apologizes for calling the Massachusetts  representatives, ‘doodoo faces.’ “I just can’t believe he called me a doodoo face!” fired Rep. Yolanda Baker of Mass. “The last time I pooped my pants was two weeks ago, and that’s a personal record that I pride myself upon!”