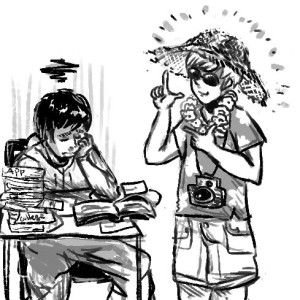 Fulfilling aspirations and dreams is something most students, who practically spend their lives stuck in school, strive to achieve.
Fortunately this includes the option of leaving school early, going straight through to college after graduation, or simply awaiting whatever fate has in store for them. Though taking a year off of high school is not generally suggested or common, it’s still an applicable choice that can be made.
Ever since I was little, I grew a strong passion for the University of Michigan. A detailed memory got engraved in my mind when my uncle and I would spend tireless nights on vacation playing NCAA football on his Xbox 360. Although I did grow an adoration for the Division 1 athletic school, my parents made it clear that without a scholarship, I could not, would not, and should not by any means get my hopes up for post high school classes out of state. Then again, can anyone truly stop a stubborn teenager once they’ve set their mind?
According to an article on U.S. News Weekly, the topped ranked colleges in the nation are up North. Therefore, it gives students living in the lower states a disadvantage when it comes to choosing in-state colleges. But what makes sense to me is if a student plans on paying tons of money for tuition, they might as well attend a school they love.
The question is this: Is it worth taking the year off of school to become a resident of a new state and even start your life off with a job and settle down before picking your education back up?
Disadvantages in taking a year off include losing the motivation of actually wanting to go to college and study after the year is up, becoming unfocused in forms of getting a job and not being able to keep up with school therefore not attending at all. Some people can balance their priorities, but the lower class usually can’t afford it.
Around 60% of high school graduates choose to attend four-year colleges every year, while others choose technical schools and two-year community colleges.
Usually students who can’t afford any means of education after high school end up enrolling into the military. According to a Policymic article, three million young Americans drop out of high school every year, and over 8,000 per day.
On the other hand, taking a year off allows you to study at the college of your dreams, and that’s all that can be said. All that is needed to make this happen (which is easier said than done) is moving to the state that the particular school is, or moving in with any family you have available, for a year.
On average, about 71% of American students graduate high school each year. Applying and getting into the school is a completely different story. Hopefully you are sure whether or not you have what it takes to get into the college or university, but if not a scholarship is always there to rely on.